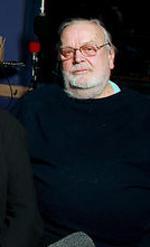 William Gaskill, our first and most frequent Granada, is one of the most influential British stage directors of the last 50 years. “Bill” has directed Sir Alec Guiness, Maggie Smith, Simone Signoret, Sir Laurence Olivier, Paul Scofield, to name a few. He received a Tony Award in 1959 for his direction of Epitaph for George Dillon on Broadway among numerous other honors.

Bill ran London’s Royal Court Theatre from 1965 to 1972. He left to direct at the Royal Shakespeare Company including Richard III with Christopher Plummer and Cymbeline with Vanessa Redgrave. Together with Sir Laurence Olivier, Bill founded the National Theatre Company. At the National, he directed productions including The Recruiting Officer with Olivier and Maggie Smith and The Madras House with Paul Scofield. Bill became the Royal Court Theatre’s artistic director in 1972. There for seven turbulent years he clashed with government censors over the plays of Edward Bond, and mounted a controversial production of Macbeth with Alec Guiness and Simone Signoret. Today Bill is an associate member of the Royal Academy of Dramatic Art.