He was born in Mexico City and moved to the U.S. in 1978, where he established himself as a performance artist, writer, activist, and educator. He has pioneered multiple media, including performance art, experimental radio, video, performance photography and installation art. His eight books include essays, experimental poetry and chronicles in English, Spanish and Spanglish. A MacArthur Fellow and winner of the American Book Award, he is a regular contributor to National Public Radio, a writer for newspapers and magazines in the U.S., Mexico, and Europe and a contributing editor to The Drama Review (NYU-MIT).

His original interdisciplinary arts projects and books explore borders, physical, cultural and otherwise, between his two countries and between the mainstream U.S. and the various Latino cultures: the U.S./Mexico border itself, immigration, cross-cultural and hybrid identities, and the confrontation and misunderstandings between cultures, languages and races. His artwork and literature also explore the politics of language, the side effects of globalization, “extreme culture” and new technologies from a Latino perspective.

Through his unique organization, the San Francisco-based La Pocha Nostra, Gómez-Peña has intensely focused on the notion of collaboration across national borders, race, gender and generations as an act of citizen diplomacy and as a means to create transnational communities of rebel artists. La Pocha Nostra runs a popular intensive performance workshop. Every year it takes place in a different country. In 2009 there was a winter school in Tucson (January) and a summer school in Evora, Portugal (August). He is currently working with Canadian theorist Laura Levin in a book of “conversations across the border” (Seagull Press, 2009) and with Roberto Sifuentes in a book about their performance pedagogy (Routledge,2010). Gomez-Peña was a special guest in the 2009 Havana Biennale. 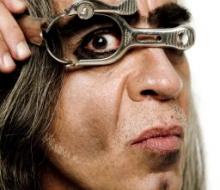