From 1981 to 1991 he was the Artistic Director of the Traverse Theatre during the Scottish National resurgence in Britain, and the Theatre Director (Artistic and Executive) at the Leicester Haymarket Theatre where he introduced radical international and alternative theatre to the United Kingdom. He has championed cross-cultural theatre throughout his career and is committed to interdisciplinary work among theatre, dance, and performance art. From 1991 to 2003, he combined his professional theatre directing with an academic post at Manchester Metropolitan University, the only university conservatory program in the United Kingdom.

Major productions from this period included: Still Moon on Fire, a music-theatre piece commissioned by the Canada Council (1996), for which the lead singer won a Dora award (analogous to a Tony or an Olivier Award in Canada), and a production of Jean-Paul Sartre’s The Flies at the Stratford Festival of Canada in 2003. He directed Endgame at Shakespeare Santa Cruz (2007). His 2008 production of A Midsummer Night’s Dream for the Dramatic Arts Centre in Shanghai won “Best Production” by the Shanghai International Arts Festival.

Since arriving at UC Davis in 2003, he has continued to write articles and has just completed a co-written book on Romeo and Juliet: Negotiating Shakespeare’s Language (Ashgate 2008), which is accompanied by a full critical edition on the web. He has also served as Chair of the Department of Theatre and Dance 2005-2008, and has created exchanges with Shakespeare’s Globe London, and the Shanghai Theatre Academy. He most recently directed John Lyly’s Gallathea for the department.

David Grenke, Department of Theatre and Dance chair, has announced that Professor Peter Lichtenfels will retire as of July 1.

UC Davis Department of Theatre & Dance presents Gallathea, written by John Lyly and directed by Peter Lichtenfels. This gender-bending Elizabethan comedy explores what it is like to portray a woman’s society in vaudeville style. The contemporary set and spirit include live video, original music, outrageous costumes and text messaging. Gallathea opens on Thursday, Nov. 11, and continues through Saturday, Nov. 20, at Main Theatre, Wright Hall, UC Davis. 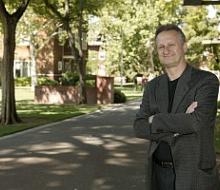