From 1996 to 1999, Sara collaborated with MacArthur “Genius” Guillermo Gomez-Pena in a series of interdisciplinary performance installations and toured them throughout the U.S., Mexico and Europe. With her company Contraband, she cre­ated Religare, The Invisible War, Oracle, and The Mira Cycles. Sara was awarded a Guggenheim Fellowship to create the Monk trilogy (Survival, Feast of Souls, and Beloved) in May 2000 in San Francisco. Survival was staged in 2000 through a partnership with NEFA/National Dance Project. Feast of Souls was performed at ODC Theater in 2001, Dance Mission in 2002 and toured to UC Riverside and The Dance Center at Columbia College, Chicago in 2003. She presented Monk at Yerba Buena Center for the Arts in 2003. Sara presented Lotus 695 in Halilfax, Nova Sco­tia, through a special creation-based residency sponsored by Live Art Productions. In 2005 she created and presented Sky at the San Francisco International Arts Fes­tival, and in 2006 Telios/Telios at ODC Theater, both through funding from Dance USA. The San Francisco Chronicle named Telios/Telios among the Top Ten Dance Performances for 2006. She presented Inspirare at Theater Artaud in March 2007. Her recent work Redgoldsky joined Telios/Telios and Inspirare to form an evening-length trilogy that was presented at Theater Artaud in May 2008. Her most recent work, Shapeshifter, was presented at ODC Theater in October 2009.

Sara is currently teaching and conducting research into her next major work, tribes, in collaboration with David Szlasa though a Gerbode Fellowship at San Francisco’s Yerba Buena Center for the Arts for inclusion in the 2010 performance season. 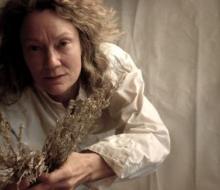