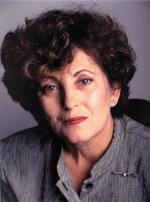 Granada Artist-in-Residence Helena Kaut-Howson worked with students on a collaborative theatre piece based on the work of Polish writer Bruno Schulz titled Sanatorium Under the Sign of the Hourglass after one of Schulz’s stories.


Kaut-Howson said her fascination with the works of Bruno Schulz dates back to her own childhood in Poland. Hourglass, in which the central character undertakes a journey to rescue his father from death, was written in 1938, just one year before war broke out in central Europe. Some of its themes evoke images of the atrocities that were to come.

“Schulz lived and wrote in times when the dark clouds of facism and Nazism were rising on the horizon,” Kaut-Howson said. “As a Jew, he was among the first to perish in the Holocaust, gunned down by a Nazi officer in 1942.” Kaut-Howson’s father was also murdered by the Nazis in the same year, not far from Drohobych. Thus, she said, her research into Schulz’s life and work became a personal search for the father she never knew, elements of which were woven into the UC Davis production.

Helena Kaut-Howson was trained at the Polish State Theatre School and later at the Royal Academy of Dramatic Art in London. She has gained international recognition as a director, working extensively in Britain, Poland, Israel, Ireland and Canada. From 1992 to 1995 she was Artistic Director of Theatr Clwyd, Wales, raising the profile of the theatre to an international level and attracting major artists, including Sir Anthony Hopkins and Julie Christie. internationally recognized director.

Hourglass was Kaut-Howson’s second Granada residency on the UC Davis campus: she directed Gorky’s Summerfolk in 1999.