Launched in 1982, the UC Davis Granada Artist-in-Residence program is unique in American university theater, bringing prominent theater artists—directors, playwrights, choreographers, or filmmakers—to Davis each academic quarter to teach and create a work for public performance. A special opportunity for graduate and undergraduate students to work closely with major theater and dance practitioners, it is a unique cross-cultural experience.

Established with funding provided by Britain’s Granada Television, the program originally hosted British practitioners exclusively, but in the 1990s, it was expanded to include distinguished artists from all parts of the globe, including the U.S., to better reflect the rich cultural mix of students at UC Davis.

Since its inception, the Granada Artist-in-Residence program has brought a roster of gifted artists to UC Davis. These artisans include playwrights Philip Kan Gotanda and Mark Ravenhill, directors Irina Brown and William Gaskill, as well as choreographers John Jasperse, Bill T. Jones and Doug Varone. Former Granada Artists Mindy Cooper and Peter Licthtenfels are now members of the Department of Theatre and Dance faculty.

All Granada artists work closely with the permanent faculty to integrate their unique talents and areas of interest into the existing curriculum.

Alumna Sonya Eddy (B.A., theatre and dance, ‘92), best known to television audiences for her long-running role as head nurse Epiphany Johnson in the ABC soap opera General Hospital, has died. She was 55.

For their final project, Professor Margaret Laurena Kemp, Department of Theatre and Dance chair, along with the students and guest artists from the fall quarter course DRA 199: Theatre for Social Change and Social Justice have created a video inspired the striking UC graduate students and teaching assistants.

Poetry by doctoral student Diego Martínez-Campos (M.F.A, dramatic arts, ‘20) has been selected to be part of Catalyst New Music, an innovative music collaboration, along with the work of 14 other artists across the U.S.A.

A Documentary Film on “RANKED: THE MUSICAL” Premieres

Ranked: The Musical, which was developed in part at UC Davis through Catalyst Theatre/Ground and Field Theatre Festival, is the subject of a documentary film My So-Called High School Rank, produced by HBO. The film was recently presented at DOC5 Film Fest in Menlo Park, CA, and is making the rounds at numerous festivals this fall including the Woodstock Film Festival.

Erika Chong Shuch is a performance maker, choreographer and director whose topic-driven ruminations coalesce into imagistic assemblages of music, movement, text, and design. Interested in expanding ideas around how performance is created and shared, Shuch’s work has been performed in city halls, theaters, industrial offices spaces, diners, parking lots and food courts.

The Department of Theatre and Dance has selected the Granada Artists-in-Residence for 2022-2023. Erika Chong Shuch will be the fall quarter guest artist and David Adam Moore and Victoria “Vita” Tzykun will be the joint guest artists for winter 2023.

Shinichi Iova-Koga, artistic director of the physical theater and dance company called inkBoat, is the winter 2022 Granada Artist-in-Residence for the Department of Theatre and Dance. He will stage a collaborative project titled Clouds from a Crumbling Giant. The company has received five San Francisco Izzie awards and has toured in Europe, Asia, and the United States.

History of the Program

Originally the Department of Theatre and Dance faculty conceived of establishing a relationship with a professional production company in order to draw upon the expertise of eminent professionals who would come to the department for a limited time to create and teach.Faculty member Dan Snyder, who had worked as a designer for Granada Television Ltd (best known in the U.S. for its productions of Brideshead Revisited, The Jewel in the Crown, and Lost Empires), suggested that the department approach Granada, which had a wealth of contacts in British theater. 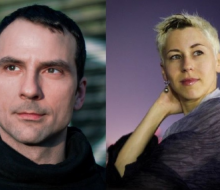