Margaret Laurena Kemp has appeared on regional and international stages including Arena Stage, Mark Taper Forum, Yale Rep, South Coast Repertory, La Mama Theatre (Melbourne, Australia), Theatre of Changes (Athens, Greece), Red Pear Theatre (Antibes, France), and The Magnet Theatre (Cape Town, South Africa). She won worldwide praise for her starring role in the film Children of God. Her latest film, the supernatural thriller, The Dark Rite, is slated for a 2016 release. She has also acted in television programs, including The Orlando Jones Show, Commander in Chief and others. Her visual work has been shown in solo and group shows at Art Share Los Angeles and The National Gallery of Art in Nassau, Bahamas. She holds memberships in One Union (SAG-AFTRA) and Actors Equity Association (AEA).

Kemp serves as Director of Creative Projects and on the advisory board of the Fitzmaurice Institute, which supports people in finding and using their unique voices—in healthy, clear, and creative ways—while also developing greater freedom and presence. She also is a faculty member of MICHA Michael Chekhov Association, which strives to be a support to and global resource for those engaged in practice and research as it relates to Chekhov’s psychophysical performance approach and its many forms of application.

Among her accolades, Kemp received the 2019 MICHA Michael Chekhov Scholar Award and her UC Davis production of The Bluest Eye was honored with Kennedy Center American College Theatre Festival Awards for Outstanding Ensemble, Outstanding Directing, Outstanding Costumes and Special Prize for Puppetry as well as being selected as a regional nominee (region VII) in 2019.

The Department of Theatre and Dance production of The Bluest Eye will be presented at the Chicago International Puppet Theater Festival in January 2022. The show was originally performed at UC Davis in spring 2018.

Alumni Appear in “The Thanksgiving Play”

A number of alumni appear in The Thanksgiving Play, a production which marks the debut of the Davis Repertory Theatre on Nov. 13 and 14 at 2 p.m. in the Village Homes Amphitheatre, 2655 Portage Bay East in Davis.

Professor Margaret Laurena Kemp is among the artists exhibiting in “Monitor: Surveillance, Data, and the New Panoptic” at the Institute of Contemporary Art (ICA) at the Maine College of Art and Design. The installation opens Oct. 1 and runs through Dec. 10.

Professor Margaret Laurena Kemp appears in the new film Ten-Cent Daisy which has its world premiere at this year’s Urbanworld Film Festival’s silver jubilee in New York. The film will be shown Oct. 2 at 12:45 p.m.

Professor Margaret Laurena Kemp is a co-author of “Unity over Unison: Creating AntigoneNOW in Lockdown,” which has been published in a recent edition of the journal Theatre Topics, vol. 31, no. 2, July 2021.

In fall 2020, theatre programs at UC Davis and Northwestern University joined forces to devise and generate a new form of virtual performance.

Margaret Laurena Kemp, associate professor of theatre and dance, has been presented with the Forum Article of the Year Award by the board of the journal Voice and Speech Review (VSR), the official publication of Voice and Speech Trainers Association (VASTA). The award was given for Kemp’s article It Is All about Love. Listen to Me, Y’all. Yeah.

Future Climate in the Laboratory and in Performance Final Presentations

In collaboration with the Science, Humanities and Arts: Process and Engagement (SHAPE) program, there will be a public presentation of final projects for the course, Transforming Exclusion to Expression: Gender and Race in Climate Science on Dec. 10 11 a.m. -1 p.m.

In the course, students took an artistic eye to interviews they conducted with climate scientists.

Professor Margaret Laurena Kemp will discuss the UC Davis Department of Theatre and Dance’s 2018 production of “The Bluest Eye” as part of a Dragon Con presentation about the use of puppets in the performance. Kemp co-directed the production.

In fall quarter, the UC Davis Department of Theatre and Dance presents “CLICK,” an innovative contemporary drama which spotlights five students who struggle with their identity in the digital age. The directors are now seeking audition videos.

Written by Jacqueline Goldfinger, Granada Artist-in-Residence, the presentation will be performed online Dec. 3, 5, 10 and 11.

The UC Davis Department of Theatre and Dance’s 2018 production of “The Bluest Eye” has received four awards at the 2019 Kennedy Center American College Theatre Festival.

Pecola Breedlove, a young black girl, wants nothing more than to be loved. Confronting turmoil at home, she prays for Shirley Temple’s blue eyes, believing their beauty is the only thing standing between her and the happiness of the white girls at school.

Join the UC Davis African American and African Studies Program tomorrow in our brown bag of the quarter, “Confluence … Reimagining Latina/o and Caribbean Diasporas in Performance.” with Margaret Kemp, MFA, a UC Davis visiting professor in the Department of Theatre and Dance. The event will be held in 2215 Hart Hall from 12-1 pm. We hope to see you there! 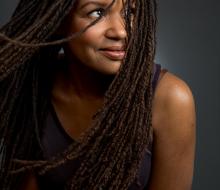