L. M. Bogad is an author, performance artist/activist, educator, Director of the Center for Tactical Performance, and co-founder of the Clown Army. He has performed across the United States, Europe, and South America, from SF MOMA, the Whitney Museum, Yerba Buena Arts Center, and the Mattress Factory to occupied zones and a squatted military base in Barcelona. He has led Tactical Performance workshops around the world, including in Cairo during the first month of the Egyptian Revolution, and was both “Art and Controversy Fellow” and “Distinguished Lecturer on Performance and Politics” at Carnegie Mellon University, and a “Humanities and Political Conflict” Fellow at ASU.

Bogad’s performances have covered topics such as the Egyptian revolution, the Haymarket Square Riot, the FBI’s COINTELPRO activities, and the Pinochet coup in Chile, and have received grant support from the Puffin Fund, Network of Ensemble Theatres, Bay Area Theatre Artists Fund, U.C. Institute for Research in the Arts, the British Academy and the British Arts and Humanities Research Council. His newest piece, Economusic: Keeping Score, has been performed in NYC at the Austrian Cultural Forum and the Hemispheric Institute for Performance and Politics, and at festivals in Helsinki, São Paulo, Buenos Aires, Santiago, at SF MOMA, and Barcelona. His play, Cointelshow: A Patriot Act, was published by PM Press and recently performed at the San Francisco Mime Troupe’s Studio and in New Orleans for ArtSpot Productions.

Bogad’s first book,Electoral Guerrilla Theatre: Radical Ridicule and
Social Movements, analyzes the international campaigns of performance artists who run for public office as a radical prank. That book, and his many articles on political performance, are used in college classes internationally. His new book, Tactical Performance: On the Theory and Practice of Serious Play, analyzes and critiques the use of guerrilla theatre/art for human/civil rights, social justice, labor, and environmental campaigns. He also wrote and produced a documentary, Radical Ridicule: Serious Play and the Republican National Convention.

Bogad has led Tactical Performance workshops, helping activists create
performative, nonviolent images to contest and critique power, in revolutionary Cairo, Barcelona, Riga, Helsinki, Reykyavik, Buenos Aires,
Trondheim, across the USA and Europe, and for the Center for Victims of
Torture. He has been a commentator on political performance on Michael
Krasny’s “Forum,” Air America, NPR, Pacifica, Peace Radio, and many other radio stations and programs.

Performing Truth: Works of Radical Memory for Times of Social Amnesia, which you can purchase here.

Tactical Performance: The Theory and Practice of Serious Play, which you can purchase here.

Cointelshow: A Patriot Act (a darkly satirical, $5 play about COINTELPRO), which you can purchase here.

Professor L.M. Bogad has been awarded a grant from the Creative Work Fund. The grants are given to Greater Bay Area artists collaborating with nonprofit organizations to develop new works of theater, traditional art, dance, poetry, arts activism and more.

American Theatre Magazine has spotlighted Professor L.M. Bogad, chair of theatre and dance, for his efforts as an activist clown during the 2020 presidential election. In an article titled “Send in the Activist Clowns,” writer Nicole Gluckstern details the work of numerous performers who used street theatre to provoke laughter and political introspection nationwide.

To read the article, visit the American Theatre Magazine website.

Bogad Recognized by U.S. Dept. of Arts and Culture

Professor Larry Bogad, Department of Theatre and Dance chair, has been recognized by the U.S. Department of  Arts and Culture as one of the 25 creative practitioners who will deepen and support the building of our People’s WPA platform.

Professor Larry Bogad, theatre and dance chair, is the artistic director and producer of the project Delivering Democracy. The troupe, which has been focused in the battleground state of Pennsylvania, features dancing mailboxes/ballot drop boxes and has entertaining folks by dancing to a reworked version of the pop tune “Please Mr. Postman” and distributing accurate voter information.

Professor Larry Bogad, theatre and dance chair, has been featured in a Teen Vogue article “Pranks as Political Activism: From the Yippies to TikTok,” which spotlights activists throughout history who have incorporated humor, satire, or irony into their protests.

Professor Responds to Pandemic with “The Plague” Podcast Series

As a response to the COVID-19 pandemic, Professor L.M. Bogad has created “The Plague,” a podcast series that not only explores the pandemic but also our nation’s homemade plagues created by human socioeconomic systems.

L. M. Bogad, associate professor of theatre and dance, draws on his own experiences in the use of humor and theatrics in protests in Tactical Performance: The Theory and Practice of Serious Play.

In his new book Bogad explores the use of theatrical techniques in protest, with a special emphasis on humor.

WE, THE PEOPLE, DO HEREBY CREATE
THE U.S. DEPARTMENT OF ARTS AND CULTURE*

Inciting creativity in the service of empathy, equity, and social imagination.

*The USDAC is not a government agency.

A network of artists all over America have started something called the U.S. Department of Arts and Culture. No, the government doesn’t really have one of those, but these artists believe that one should exist so they’re performing it into existence.

Professor Larry Bogad presents an InsTED Talk at 10 a.m. Saturday, at “Creative Production Meets Political Imagination”; at 7 p.m. he will be on a panel with a group of accomplished artist-activists. The conference takes place this weekend, November 15-16, 2014, at California Institute of Integral Studies (CIIS), 1453 Mission Street, San Francisco.

Ins-TED Talks and Theatre of Yugen

Professor Larry Bogad will be performing in InsTED Talks  at Yerba Buena Arts Center in San Francisco on November 23, 2013.

Professor Larry Bogad recently presented a mesmerizing talk at TEDxUCDavis: Tactical Performance: Thinking Theatrically for Powerful Protest. Watch as he discusses why good theater makes good protest, and why being right is not enough.

This month Professor Larry Bogad will be in Finland delivering a talk at the Baltic Circle Festival where he will perform “Economusic” and “PAPERWORK: Department of Dreams, Fears and Hopes.”

Also in Finland he will present a talk in Tampere about revolution and performance and lead a workshop on Artistic Activism: Tactical Performance with over 20 artists from almost every country on the Baltic Sea.

On November 28 he will perform “Economusic” and “PAPERWORK: Department of Dreams, Fears and Hopes” at NYU’s Hemispheric Institute for Performance and Politics.

— Performance artist/scholar L.M. Bogad presents a satirical musical illustration of economic trends in his show “Economusic.” As he plays piano, flute, hotel bell, and other instruments—the notes that he plays go up and down following the economic charts projected on the wall behind him—following  falling property values and wages, rising prison populations and sea levels.

Professor Larry Bogad will speak Saturday, March 31, at San Francisco’s Kadist Foundation as part of the Living as Form exhibition

The Austrian Cultural Forum is pleased to present an evening of performance art in conjunction with its current exhibition, It’s the Political Economy, Stupid. Artists L.M. Bogad and Pablo Helguera will take on the global economic crisis in their performances, which will utilize the ACFNY’s gallery space as well as it’s state-of-the-art theater. 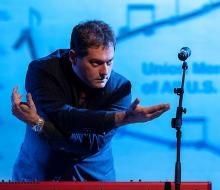