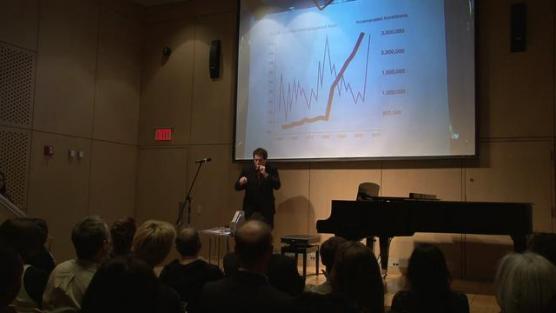 — Performance artist/scholar L.M. Bogad presents a satirical musical illustration of economic trends in his show “Economusic.” As he plays piano, flute, hotel bell, and other instruments—the notes that he plays go up and down following the economic charts projected on the wall behind him—following  falling property values and wages, rising prison populations and sea levels. Bogad makes the cacophony of the economy ring loud and clear.“Economusic” will be paired up with another ironic piece entitled “PAPERWORK: The Department of Dreams, Hopes and Fears.” The event will take place at 7:00 p.m., Wednesday, Nov. 28 at NYU’s Hemispheric Institute for Performance and Politics. It is free and open to the public with photo ID required to enter NYU buildings.

Bogad calls himself “the world’s preeminent, only and worst Economusician,” announcing in an ironic manifesto that its melodies “are simple, atonal, dissonant. This reflects the distempered and ruthless nature of our neoliberal chaos-process. Econo-cacophany is our default setting; any harmony is accidental and does not reflect a naive hope for a more harmonious world.”

Bogad refrains from speaking during the performance and communicates instead through the language of music, physical comedy and infographics, making the message universally comprehensible. Instead of the dryness that often plagues economic conversation, Bogad invites the audience to experience the ramifications of the data firsthand.

“When the audience kazoos, hums, and drums along, they actually feel the data in their bodies. That incarceration rate shoots up painfully high in the last few decades on the chart!” Bogad says.  “It actually feels uncomfortable trying to sustain that rising pitch. The laughter that results, I hope, provokes reflection and dialogue.  “Economusic”is intended as a joyful, interactive, shared experience exploring some of the grim realities of our world.”

In “PAPERWORK: The Department of Dreams, Hopes and Fears” Bogad poses as an authority figure at a desk with a sign that reads ”WRITE YOUR DREAMS.” As audience members comply, he changes the signs to “WRITE YOUR HOPES” and/or “WRITE YOUR FEARS.” He then “processes” their personal writings in a series of absurd ways; censoring, annotating, footnoting, cutting, folding, crushing, twisting, burning, and inhaling the smoke of the burned document to evaluate its smell.

L.M. Bogad is quickly emerging as one of the most influential and unique voices in political activism today. An author and performance artist, he coined the term “Tactical Performance,” which is the name of his next book, a historically-informed “how-to” guide for creative nonviolent activism. As an associate professor at UC Davis Department of Theatre and Dance, he teaches classes about tactical performance and guerilla theater such as “Satire, Irony and Protest,” and “Oppositional Performance and Social Movements.”

Bogad said that although guerilla theater is just one tactic in the toolbox of political activism, it is one of the core necessities in the practice of protest.

“A thoughtful performance that is also playful is a better way to engage with people who don’t already agree with you. It reflects the world we want to see in a playfully transgressive way,” Bogad said. “It disrupts cliché, and we are weighed down by cliché. Protest is an art form and should be treated as such.”

L.M. Bogad is an author, performer and the founding director of the Center for Policital Activism/West Coast. He writes, performs and strategizes with mischievous artists such as the Yes Men, Billionaires for Bush and La Pocha Nostra. He is a veteran of the Lincoln Center Theatre Director’s Laboratory, and a co-founder of the Clandestine Insurgent Rebel Clown Army His produced plays have covered topics such as the Haymarket Square Riot, the FBI’s COINTELPRO activities, the Pinochet coup in Chile and global climate chaos. His play, “COINTELSHOW: A Patriot Act” was recently published by PM Press.

Bogad’s book, “Electoral Guerrilla Theatre: Radical Ridicule and Social Movements,” analyzes the international campaigns of performance artists who run for public office as a radical prank. That book, and his many articles on political performance, are used in college classes internationally. His next book, “Tactical Performance: On the Theory and Practice of Serious Play,” analyzes and critiques the use of guerrilla theater/art for human and civil rights, and for social justice, labor and environmental campaigns.

Bogad has led Tactical Performance workshops, helping activists create performative, nonviolent images to contest and critique power, in Cairo, Reykyavik, Buenos Aires, in New York for the College of Tactical Culture, for the Center for Victims of Torture, as the Humanities and Political Conflict Fellow at Arizona State University and at Carnegie Mellon University both as an Art and Controversy Fellow, and as a Distinguished Lecturer on Performance and Politics. The British Academy and British Arts and Humanities Research Council funded his documentary, “Radical Ridicule: Serious Play and the Republican National Convention.” He has been a commentator on political performance on Air America, NPR, Pacifica, Peace Radio, and other radio stations and programs.  He is an associate professor in performance studies at UC Davis.

What: “Economusic,”a performance by L.M. Bogad featuring the musical translation of economic trends.