Due to technical difficulties, the May 20 Film Fest @ UC Davis program has been rescheduled for May 27 at 7 p.m. PDT, with a Q&A and awards presentation to follow.

The festival features short films of eight minutes or less in length, submitted by UC Davis students and recent graduates. Submissions include a variety of genres, from animation to live action to documentary to experimental. This year the selection committee has also accepted submissions of original screenplays of eight pages or less.

The Art of Costume Design DRA/CTS 116: Design on Screen

Tara Brandel, theatre and dance graduate student, will share her reworking of classic Irish theatre (with apologies) on Wednesday, June 6. “Go and Come” will be performed in the Della Davidson Performance Studio in Nelson Hall at 4:30 p.m. The presentation is free.

According to Brandel, the work in progress is a social experiment that is post Celtic Tiger, post Celtic revival, post whatever… The one-act features undergraduate student Rose Kim, doctoral student Jesse Stokes, and graduate student Justin Streichman and is devised and directed by Brandel. 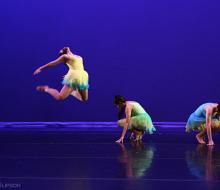 To Wyatt Pavilion and Nelson Hall Studio: Proceed as above, continuing on Old Davis Road past the Mondavi Center to Visitor Parking Lot 5.

To Main Theatre, Arena Theatre, and Laboratory Theatre A: These three theatres are located in Wright Hall, a short walk through the Arboretum from Visitor Parking Lot 5.