Mindy Cooper has had the privilege of spending the last 40 years working as a dancer, choreographer, director, producer and teacher. From dance companies (Twyla Tharp Dance, Eliot Feld Ballet, Kansas City Ballet, Thingsezisee’m Dance Theater) to Broadway/Off-Broadway (Chicago, Titanic, Song and Dance, Beauty and the Beast, Dracula The Musical, Being Seen, The Eternal Space, Men Are From Mars, Women Are From Venus, Live!, 50 Shades – The Musical Parody, Soul Doctor, Wrong Mountain), her passion for new works has always steered her career. She has created works for NYMF, FringeNYC, National New Play Network, National Tours, NYSF, Peak Performances, and Town Hall NYC.  She is Co-Founder/Co-Director of Catalyst: A Theatre Think Tank, a festival of new works on the campus of UC Davis, where she is a Professor of Theatre and Dance. Her extensive regional work has won numerous Bay Area Theater Critics, Theater Bay Area and Broadway World Awards. She is the Chair of the Advisory Board of the Ann Reinking Scholarship Program, created to support and mentor young dancers early in their professional careers. mindycooper.com catalyst3T.com offthelane.org

Submit Video Auditions for Aliyah and the Princess Jasmine Barbie Doll by Jan. 22

The Department of Theatre and Dance’s Catalyst: A Theatre Think Tank (C3T) is holding auditions for a reading of a new work, open to all UC Davis students.

Professor Mindy Cooper is the chair of the Ann Reinking Scholarship Program which honors the late actress/dancer/choreographer. The program presented its first scholarship at a fundraising event in New York on Nov. 8.

Professor Mindy Cooper is collaborating with pianist Lara Downes on Tomorrow I May Be Far Away which includes an appearance by Pulitzer Prize-winning poet Rita Dove. The in-person performance is Nov. 3 at 8 p.m. (EST) at Sixth & I in Washington, DC.

Mindy Cooper Directs “Still Will Be Heard” for Mondavi Center

Professor Mindy Cooper is the director of Still Will Be Heard which shows at the Robert and Margrit Mondavi Center for the Performing Arts on Nov. 17, 18 and 19 at 7:30 p.m.

Mindy Cooper Leads Advisory Board for the Ann Reinking Scholarship

Broadway veteran Mindy Cooper, professor of theatre and dance, is the chair of the advisory board for the Ann Reinking Scholarship which has been established to honor the late award-winning choreographer, dancer and actress. The scholarship is now seeking applications for its first gift now through June 30.

Broadway veteran Mindy Cooper, professor of theatre and dance, will be among the advisory board members for The Ann Reinking Scholarship which has been established to honor the late award-winning choreographer, dancer and actress.

Romeo and Juliet is reinvented as a musical comedy when the UC Davis Department of Theatre and Dance, Southern Utah University’s (SUU) Department of Theatre, Dance and Arts Administration and Catalyst: A Theatre Think Tank premiere Juliet and Romeo. Co-written by Paul Gordon, a Tony Award nominee for Jane Eyre, and Curtis Moore, an Emmy Award nominee for The Marvelous Mrs. Maisel, the production will be accessible virtually June 3 at 6 p.m. PDT through midnight on June 5.

Faculty, students and alumni from UC Davis’ Ground & Field Theatre Festival (GFTF) and members of Bike City Theatre Company are participating in the first developmental reading of a new Off-Broadway bound musical, Paper or Plastic. Presented in conjunction with The Jade/Anthony Company, the reading is scheduled for Dec. 9 in the Della Davidson Performance Studio, Nelson Hall at UC Davis.

Peter and the Starcatcher, the award-winning stage prequel to Peter Pan, will be presented by the UC Davis Department of Theatre and Dance Feb. 27 through March 7.

The Department of Theatre and Dance will be holding auditions for the musical comedy “Flora the Red Menace” on Dec.

Due to Circumstances, we will be presenting semi-staged concert version of “Pippin” for two performances only.

The award-winning musical “Pippin” receives a semi-staged concert when presented by the Department of Theatre and Dance on Sunday, Feb. 25. The performances take place in the Ann E. Pitzer Center at 1 p.m. and 5 p.m.

Mix a Hitchcock masterpiece with an action thriller, add a dash of Monty Python and you have “The 39 Steps,” a fast-paced whodunit for anyone who loves the magic of theatre, a riotous blend of virtuoso performances and wildly inventive stagecraft.

The UC Davis Department of Theatre and Dance presents this acclaimed comedy in the Wyatt Pavilion Theatre May 11-13 and 18-20 at 7 p.m. with 2 p.m. matinees on May 13 and 20. General audience tickets are $18.50, faculty/staff tickets are $17 and students/seniors tickets are $12.

The annual Broadway Backwards — featuring male singers performing songs traditionally sung by women and women singing tunes written for men — was presented Monday, March 21 at Broadway’s Al Hirschfeld Theatre and was a rousing success. Among the performers was spring 2016 Granada Artist-in-Residence Mindy Cooper, who was part of a special musical number celebrating the Tony Award-winning CHICAGO The Musical.

Imagine that in the wake of a post-apocalyptic event, a group of survivors gathers together and recalls the classic “Cape Feare” episode from television’s “The Simpsons.” From their recollections, this group evolves the tale into the foundation of a new theatrical and musical artform – complete with commercials. Playwright Anne Washburn has taken this concept to hilarious heights in her wickedly funny “Mr. Burns, A Post-Electric Play,” billed as a dark comedy with music.

The UC Davis Department of Theatre and Dance presents The Who’s Tommy directed by Granada Artist-in-Residence Mindy Cooper with music and lyrics by Pete Townshend. 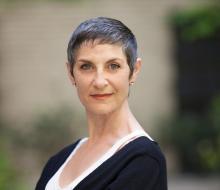