Michael Barakiva is an Armenian/Israeli director based in New York City. He has worked in New York and around the country, developing new works and staging classics.  Most notably, he has directed the premieres of Wendy Wasserstein’s Welcome To My Rash and Third at Theatre J in Washington, D.C., the first workshop of The 25th Annual Putnam County Spelling Bee, UP by Bridget Carpenter at the Oregon Shakespeare Festival, and The Seagull by Anton Chekhov at the Blue Heron.  Most recently, he directed the premiere of The Usher’s Ball by Fengar Gael at the Collaborative Arts Project 21 and White People by Neil Cuthbert and They Float Up by Jackie Reingold at the Ensemble Studio Theater.

Michael is the Resident Director of the Lake George Theater Lab. He has directed readings or workshops at the Roundabout Theater, Arena Stage, Williamstown Theatre Festival, ACT, New York Theater Workshop, New Dramatists, Ars Nova and the Rattlestick Theater. He was also featured on an episode of MTV’s “MADE,” in which he coached two high school students through the process of writing, directing and producing a play. He is working on his first full-length play, currently titled Work. His awards and affiliations include Phil Killian Fellow at the Oregon Shakespeare Festival, Drama League Summer Fellowship, David Merrick Prize in Drama and Lincoln Center Directors’ Lab.

Clowns, Music and Old Hollywood Create Humor Out of Tragedy in Granada Artist’s Rosencrantz and Guildenstern Are Dead at UC Davis

The production is the second and final work to be directed by fall Granada Artist-in-Residence Michael Barakiva at UC Davis. Barakiva previously directed the devised Sideshow Lab workshop The Zona Rosa Project. 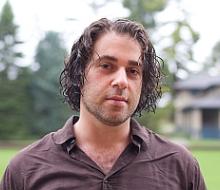