The Department of Theatre and Dance is proud to announce Qudus Onikeku, one of the preeminent Nigerian choreographers working today, as Winter 2013 Granada Artist-in-Residence.

In 2007 he directed “Do We Need Coca-Cola to Dance?”, an urban dance project in various African cities which gave rise to a documentary film. Other works include “I Must Set Forth,” (2009) at the Bates Dance Festival, and “My Exile is in my Head,” (2010) at Centquatre in Paris and “STILL/Life” (2011) at the Festival d’Avignon. Onikeku’s work is influenced by Nigerian dance, hip hop, acrobatics, and more, and tends to explore themes of identity and exile.

Onikeku says, “I create a movement identity that fuses dance and acrobatics, while I make my Yoruba culture my basis, and combining it with several other influences such as hip hop, capoeira, and contemporary dance vocabularies, to weave a certain understanding of the human nature and condition.” 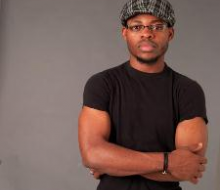