Lucy Gough is an acclaimed British playwright. Her works are frequently broadcast on BBC World Service and BBC Radio.

Her first BBC broadcast was in 1994 with Our Lady of Shadows (BBC Radio 3).  Since then her plays have been featured on the BBC World Service including Prophetess as Play of the Week.  She has had five plays on BBC Radio 4: Head, The Red Room, The Mermaids Tail and Judith Beheading Holofernes  and The Raft.  Her Radio dramatization of Wuthering Heights for BBC Radio 4 was broadcast as the classic serial in Woman’s Hour  in July 2003. Mapping the Soul was broadcast on BBC Radio 4 in July 2005. The White Hare was broadcast in 2009 on BBC Radio 7.

She is creative research fellow at Aberystwyth University, UK.

Hinterland Radio Dramas are Both Seen and Heard at UC Davis

UC Davis Department of Theatre and Dance presents Hinterland, a two-part radio play, written and directed by Granada Artist-in-Residence Lucy Gough. Two poetic dramas take the audience into a dark surreal landscape sculpted in sound and voice. Both explore the search for the soul on a journey to the edge, the place where things change. The subtitles are Mapping the Soul, which is pure radio drama, and (again) Hinterland, a hybrid between radio and theatre.  Hinterland  opens on Wednesday, Dec. 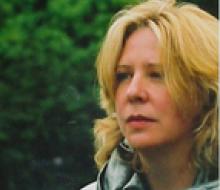