The Department of Theatre and Dance is proud to announce Barry McGovern as Fall 2012 Granada Artist-in-Residence.

Barry McGovern is an Irish actor who has had a long career in theater, film, television and radio. His early career included spells with the RTÉ Players and the Abbey Theatre of Ireland. He is regarded by many as one of the leading exponents of the work of Samuel Beckett. His one-man Beckett show, I’ll Go On, produced by Dublin’s Gate Theatre, has played worldwide. He has toured with the Gate productions of Waiting for Godot, Endgame and Happy Days. He has also played in Krapp’s Last Tape. In early 2012 he played Vladimir in the acclaimed production of “Waiting for Godot” at the Mark Taper Forum in Los Angeles, which garnered him a 2012 Ovation Award Lead Actor nomination.

His most recent stage appearances were as George Aaronow in Glengarry Glen Ross, directed by Doug Hughes, at Dublin’s Gate Theatre, and his new Beckett one-man show Watt at the Edinburgh Festival.

Films include Riders to the Sea, Joe Versus the Volcano, Billy Bathgate, Braveheart, Far and Away, The General, Journey of the Magi and Waiting for Godot.

In 1998 he was awarded an honorary Doctorate in Letters from Trinity College, Dublin.

Championing Beckett: Ruby Cohn and Her Legacy with Samuel Beckett

UC Davis Granada Artist-in-Residence Barry McGovern, known for his screen and stage roles in “Far and Away,”  “Joe Versus the Volcano” and “Waiting for Godot,” directs Euripides’ classic “The Bacchae” with original rock music, humor, dominatrixes and cheerleaders. A wickedly sexy Dionysus locks horns with King Pentheus in a violent power struggle between freedom and control. “The Bacchae” opens on Thursday, Nov. 29 and runs through Saturday, Dec. 8 at Main Theatre, Wright Hall. 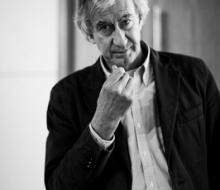