Recent alumna Jillian Yong (B.A., theatre and dance, ‘21) has been hired as the theatre manager for Carlmont High School.

Why Audition for GFTF?
A Student’s Response

Noah VanderVeer-Harris was a member of the 2019 GFTF ensemble while also serving as the publicity intern for the Department of Theatre and Dance during the same period. He appeared in the festival’s production of the new musical Fat Kid Rules the World. Noah shares his insight into why you should be a member of GFTF which has been re-branded as Catalyst: A Think Tank Theatre. 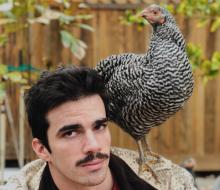 Emile Rappaport (B.A., theatre and dance, ‘19) works in video production for the Los Angeles based Zach King Team which specializes in making short, high concept videos that are shared onto Tik Tok, Instagram, and YouTube. Though Rappaport originally arrived in L.A. to pursue an acting career.

A Statement from the Chair

We are dismayed at the recent racist violence, and murders, in Atlanta, and across the country, against Asian and Asian-American people and women in particular. We recognize that this is part of an ongoing regime of racism and violence and denounce it.  We stand in solidarity with those working against racism in our communities, workplaces, government, and cultural environment.

A Statement from the Faculty

As Artists and Educators in Theatre, Dance, and Performance we unequivocally condemn the historically rooted and pervasive racist murders of African Americans and other people of color by police in the United States and globally. We acknowledge these most recent examples are not unique. We acknowledge this plague is systemic and extends beyond the police. We cannot function as a society, nor as a learning institution, in a context where people of color cannot walk, jog, drive, talk, or even sleep in their homes safely without fear of being murdered by the state. We certainly cannot teach our craft, which is by its very nature a living and breathing engagement with all people, without denouncing this violence, and the hateful rhetoric that fuels it.