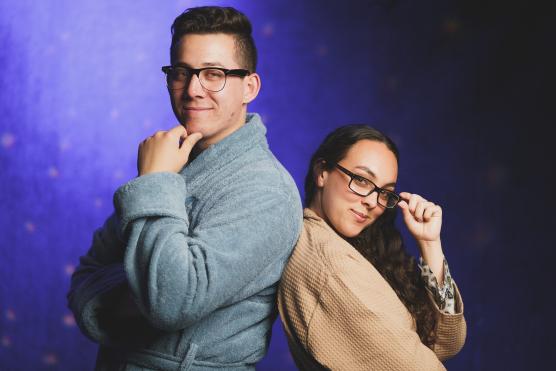 Nicholls is the spring 2019 Granada Artist-in-Residence. The production is directed by alumna Josy Miller.

“LOVE/logic}” was showcased in the 2018 Ground and Field Theatre Festival under its previous title “Parity.”

In “{LOVE/Logic}” two conference-bound theoretical physicists, set to debate the parity of the universe, meet in a Swiss train hallway, where each is by a concatenation of ridiculous coincidences unable to pass the other. As Daniel and Bronwen shuffle and spar, the situation turns haltingly romantic. A world away, in California, Daniel’s manipulative twin brother makes an unusual proposal to the woman he loves, setting up a parallel showdown between love and logic that will reverberate over 18 years. Warning: Adult themes and situations.

“The play is a masterpiece in physical comedy and a simultaneous critique of contemporary gender and power relationships,” said Miller. “Reality is many-layered, and actors embody characters real, imagined, and that occupy the spaces in between.”

General admission tickets are $18.50, faculty/staff tickets are $17, and student/senior tickets are $12. Tickets may be purchased at the UC Davis Ticket Office, located on the north side of Aggie Stadium, 10 a.m. to 5 p.m. Monday through Friday, by phone (530) 752-2471 during the same hours, or online at theatredance.ucdavis.edu.

Josy Miller has been directing professionally and in educational settings since she moved to Northern California from New York in the early 2000s. An alumna of the UC Davis Performance Studies PhD program, Miller’s original production of “The Dogs of War” premiered at the university in 2014 and played the Edinburgh Fringe Festival in the summer of 2015. Prior to her work at UC Davis, Miller spent five years as the Artistic Director at Hapgood Theatre Company in the East Bay, where she directed more than a dozen productions, worked alongside guest directors from around the state, and produced both new work and classic American and European drama. Other regional directing credits include Atmos Theatre Company (SF) and the Eugene O’Neill Foundation Theater (Danville). Since 2016, Miller has worked as the Arts Education Programs Specialist for the California Arts Council.

Andrew Nicholls began writing comedy with Darrell Vickers in Junior High. After high school in Canada the team wrote for radio, TV and stage, and for comedians and cartoonists. In 1983 they moved to Los Angeles, where they wrote for George Carlin, Mickey Rooney, and for NBC’s Tonight Show from 1986-92, as Johnny Carson’s head writers. They’ve since created twenty TV series and written over 400 episodes of children’s TV.