Andrew Nicholls began writing comedy with Darrell Vickers in Junior High. After high school in Canada the team wrote for radio, TV and stage, and for comedians and cartoonists. In 1983 they moved to Los Angeles, where they wrote for George Carlin, Mickey Rooney, and for NBC’s Tonight Show from 1986-92, as Johnny Carson’s head writers. They’ve since created twenty TV series and written over 400 episodes of children’s TV. They have a new animated show in development at Nickelodeon. Since 2013, Andrew has sold short stories to literary magazines. “Parity” is his first play in 35 years.

“A Bee In A Jar” Catalyst: A Theatre Think Tank

The Department of Theatre and Dance and Catalyst: A Theatre Think Tank (C3T) present ”A Bee in a Jar,” a play by Andrew Nicholls, on February 19 and 20 at 6 p.m. The virtual production is free.

In the play, three men with very different temperaments try to figure out why they were seized a month earlier and locked together in a featureless room.

Nicholls is the spring 2019 Granada Artist-in-Residence. The production is directed by alumna Josy Miller. 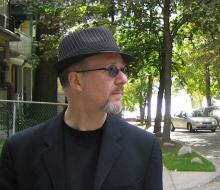