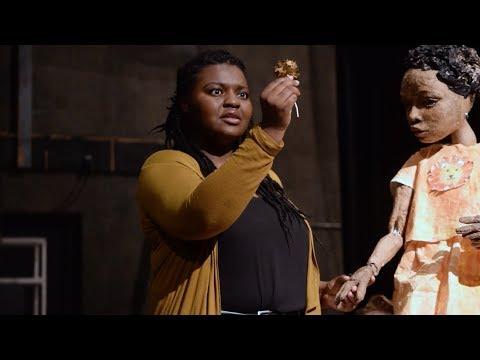 Pecola Breedlove, a young black girl, wants nothing more than to be loved. Confronting turmoil at home, she prays for Shirley Temple’s blue eyes, believing their beauty is the only thing standing between her and the happiness of the white girls at school. This powerful adaptation of Toni Morrison’s debut novel explores the destructive power of racism and the strength of a community attempting to embrace an era of change.

The UC Davis Department of Theatre and Dance presents this blistering contemporary drama in the Main Theatre, Wright Hall, May 17-19 at 7 p.m. with a 2 p.m. matinee on May 19. General audience tickets are $18.50, faculty/staff tickets are $17 and students/seniors tickets are $12.

Contains adult themes and situations, recommended for ages 16 and up.

Director Margaret Laurena Kemp said, “this show will come to life on stage by melding of the work of an African American writer and an application of South African puppetry. Janni Younge, best known for her ground-breaking puppetry work, will co-direct the production. These approaches will underscore the myth and magical realism that is ingrained in the narrative as a path to unpacking the themes of race, class and gender that are the core of this work.”

“Diamond gives Morrison’s characters enough psychological definition for us to becomes absorbed in who they are and what happens to them; they’re all allowed to speak independently of the author.” – The Washington Post

Toni Morrison is a Nobel Prize and Pulitzer Prize-winning novelist, editor and professor. Her novels are known for their epic themes, exquisite language and richly detailed African-American characters who are central to their narratives. Among her best known novels are The Bluest Eye, Sula, Song of Solomon, Beloved, Jazz, Love and A Mercy. Morrison has earned a plethora of book-world accolades and honorary degrees, also receiving the Presidential Medal of Freedom in 2012.

Doctoral, graduate and undergraduate students from theatre and dance, design, cinema and digital media, art studio as well as from a diverse range of academic majors campus wide have come together under the guidance of Margaret Laurena Kemp, associate professor of theatre and dance, and Janni Younge, international puppet designer and director, to present an innovative stage dramatization of Toni Morrison’s novel, “The Bluest Eye.” Running May 17-19 in Wright Hall’s Main Theatre, here is an overview of the process behind this monumental production.