Janni’s works include the creation and direction of Ouroboros (which toured extensively in South Africa, Europe and India), The Firebird that toured in the USA to venues including Ravinia and the Hollywood Bowl, and Take Flight, currently touring Europe. With Handspring, Janni also directed revivals of William Kentridge’s Woyzeck on the Highveld and Ubu and the Truth Commission and, with Handspring, worked on War Horse and on the Bristol Old Vic’s Midsummer night’s Dream. She created and directed puppetry for the Royal Shakespeare Company’s Tempest. Janni is a graduate of the French national school of puppet theatre, has a B.A. in Fine Art and an M.A. in Theatre.

The Department of Theatre and Dance production of The Bluest Eye will be presented at the Chicago International Puppet Theater Festival in January 2022. The show was originally performed at UC Davis in spring 2018.

The UC Davis Department of Theatre and Dance’s 2018 production of “The Bluest Eye” has received four awards at the 2019 Kennedy Center American College Theatre Festival.

Pecola Breedlove, a young black girl, wants nothing more than to be loved. Confronting turmoil at home, she prays for Shirley Temple’s blue eyes, believing their beauty is the only thing standing between her and the happiness of the white girls at school. This powerful adaptation of Toni Morrison’s debut novel explores the destructive power of racism and the strength of a community attempting to embrace an era of change. 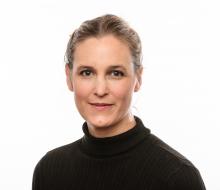