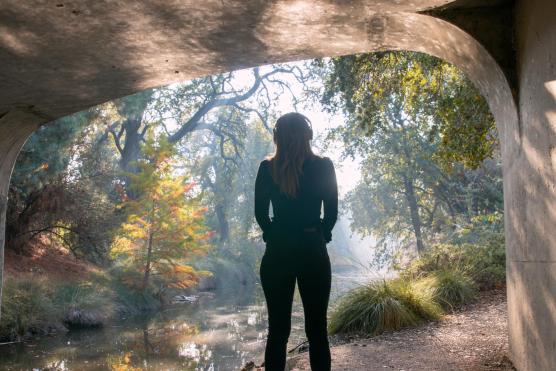 The UC Davis campus will come alive with sound through an installation of six audio works responding to specific location created by students. Location and Listening, presented by the Department of Theatre and Dance, will be accessible at noon on Dec. 3 until 7 p.m. on Dec. 10.

The artists include doctoral, graduate, and undergraduate students from performance studies, dramatic art, design, and theatre and dance who have assembled site-specific sound experiences in and around Shields Library, Mrak Hall, the Arboretum, Lake Spafford, and other campus locations. The project, overseen by Granada Artist-in-Residence Annie Saunders, reflects a variety of themes including connectivity, synchronicity, recycling, and reclamation.

To experience “Location and Listening” participants will need headphones and a cell phone or tablet with internet access to follow an online map of the sites. The installation is free and open to all.

Graduate student Janey Pintar’s “Embrace Your Journey” is a soundwalk set in the Arboretum’s Redwood Grove, built around close observations, cycles, remembrance, and the journey that encourages participants to engage their imagination and senses.

Undergraduate student LeeAnne Boot’s “A Concert by: The Lake” is a collaboration between campus creatures and modern technology, finding similarities between the natural movement of animals and human performers. Composed with field recordings of ducks around Lake Spafford, these otherwise unassuming waterfowl are transformed into “The Sleeping Mallards.”

For information about future performances at the College of Letters and Science’s Department of Theatre and Dance, visit theatredance.ucdavis.edu.