Judy Blazer has appeared on Broadway in leading roles in Me and My Girl, A Change in the Heir, Titanic the Musical, LoveMusik, A Gentleman’s Guide to Love and Murder. At New York City Opera, she appeared in Candide and Sweeney Todd. Off-Broadway: Hello Again, (Drama Desk nomination), The House of Bernarda Alba (both at Lincoln Center), Hurrah at Last (Roundabout Theater). She has sung at the Metropolitan Opera as a soloist in Twyla Tharp’s Everlast with the American Ballet Theater. She has starred as Bessie Thomashefsky in Michael Tilson Thomas’s touring concert documentary The Thomashefskys, which has been performed with the all the major symphony orchestras in the U.S. She has sung as a featured artist on the recordings by singer/actor Mandy Patinkin, violinist Nadja Salerno-Sonnenberg and over 20 other recordings. She has done song and voice characterizations for the several animated films and on television and has appeared Law and Order, As the World Turns, Guiding Light, and as a featured artist on three PBS specials: Leonard Bernstein’s New York, In Performance at the White House, Great Performances: The Thomashefskys. She is a dialect coach, fluent in Italian and wrote the Italian lyrics for The Light in the Piazza.

“Flora the Red Menace,” the first collaboration between the creators of “Cabaret” and “Chicago,” will be resurrected by the UC Davis Department of Theatre and Dance. The musical by Tony Award winners John Kander and Fred Ebb will be presented in the Wyatt Pavilion Theatre Feb. 28 – March 9, 2019.

The Department of Theatre and Dance will be holding auditions for the musical comedy “Flora the Red Menace” on Dec. 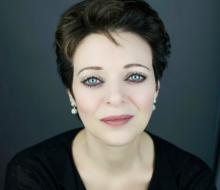