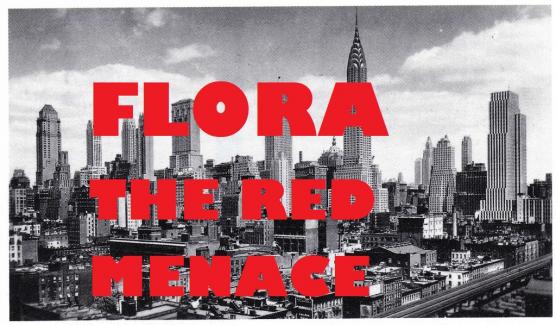 The Department of Theatre and Dance will be holding auditions for the musical comedy “Flora the Red Menace” on Dec. 1 and 2 in the Arena Theatre, Wright Hall. The musical will be performed in winter quarter Feb. 28-Mar. 2 and Mar. 7-9.

All interested individuals should sign-up for a time slot, prepare a song or 32 bars of a song. Accompaniment will be provided. Scenes and songs are posted above.

Auditions are open to all UC Davis students as well as faculty and staff.

Call-backs will be held Dec. 2 beginning at 1:30 p.m. Rehearsals will begin at the beginning of winter quarter.

The musical was the first Broadway collaboration of composer John Kander and lyricist Fred Ebb, award-winning creators of “Cabaret” and “CHICAGO the Musical,” and marked the Tony Award-winning debut of Liza Minnelli as Flora. With a new, updated book by David Thompson based on the original book by George Abbott and Robert Russell from the novel “Love is Just Around the Corner” by Lester Atwell, the musical centers on Flora, a newly graduated art student, as she embarks on making a career for herself in Manhattan during the Depression of the 1930’s. She falls in love with Harry, a fellow artist, who turns out to be an idealistic Communist. Is Flora herself a “red menace” or just that good old Broadway stand by: a Girl in Love?

The production will be co-directed by Mindy Cooper, professor of theatre, and Granada Artist-in-Residence Judy Blazer, an acclaimed veteran of numerous Broadway and regional theatre productions. Graduate student Diego Martinez-Campos will choreograph the show which will feature music direction by Graham Sobelman.

“Flora” is a love letter to theater, the arts and our ability to persevere in challenging times.

Winter 1935, a group of young artists in NYC find themselves united in their goals as the Depression deepens – to find work, to eat, to stay true to their beliefs and artistry. Their unlikely heroine Flora finds herself leading the pack and torn between which passion to follow.

The cast of “Flora” is an ensemble that plays many roles. Actors are asked to change DNA, accents and physicality on a dime. It is an exciting whirlwind of creativity for actors. Here are some of the lead roles from that ensemble.

FLORA MESZAROS - A young fashion illustrator, full of hope, optimism and the desire to take over the world. Lead by her heart, she is absolutely guileless, without a trace of attitude or brassiness.

HARRY TOUKARIAN - A shy, intense, sensitive artist. He stutters, especially when he is nervous…and he is often nervous. He has a romanticized vision of how to make the world a better place.

CHARLOTTE - A determined zealot, she is dry and droll and will find a way to get exactly what she wants. For herself and The Communist Party.

WILLY - A songwriter who plays the clarinet, Willy is our narrator throughout the evening. He shares Flora’s optimism, so necessary in these trying times.

ELSA - Flora’s best friend, she is practical and motivated, and has aspirations of being a fashion designer. But her motivational energies are sometimes more focused on her circle of friends than herself.

MR WEISS - A former Communist who has lost his jewelry store to the depression. He is kindly, knowing and patient with his young friends.

MAGGIE - Maggie has relocated to New York from Oklahoma, following her dreams of dancing professionally, escaping the dustbowl that was her childhood. She is honest and innocent and open.

KENNY - Limber and funny, Kenny is very serious about his dancing and determined to make it in the Big City, especially now that he has found his dance partner, Maggie.

MR STANLEY - The perfect department store executive. All business, ruthless, unlikable. Except by women of a certain climbing nature.

SECRETARY WILLIAMS - a secretary with a climbing nature.

Judy Blazer has appeared on Broadway in leading roles in Me and My Girl, A Change in the Heir, Titanic the Musical, LoveMusik, A Gentleman’s Guide to Love and Murder. At New York City Opera, she appeared in Candide and Sweeney Todd. Off-Broadway: Hello Again, (Drama Desk nomination), The House of Bernarda Alba (both at Lincoln Center), Hurrah at Last (Roundabout Theater).

Diego Martinez-Campos is a Mexican performing artist, choreographer, and movement educator currently based in Sacramento, CA. He strongly believes that art has the power to enrich, transform, and change people’s lives through play, collaboration, and education.