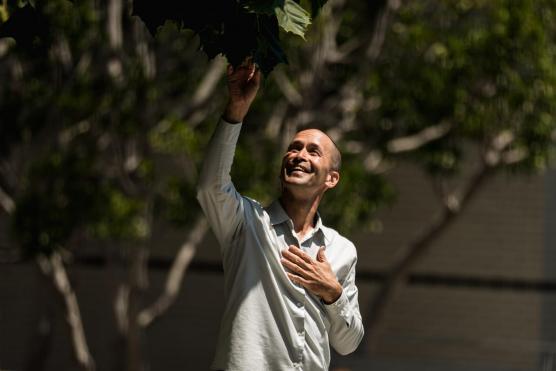 Shinichi Iova-Koga, artistic director of the physical theater and dance company called inkBoat, is the winter 2022 Granada Artist-in-Residence for the Department of Theatre and Dance. He will stage a collaborative project titled Clouds from a Crumbling Giant. The company has received five San Francisco Izzie awards and has toured in Europe, Asia, and the United States. Iova-Koga’s approach to mobility, composition, feeling states and time stems from his experience with Daoist Internal Arts, Action Theater (improvisation training), Butoh Dance, Aikido and Noh Theater. He is certified to teach Qi Gong by Lotus Nei Gong, and he runs the Swiss branch of Wudang West.

He has taught within university dance programs, most notably as a core faculty member at Mills College in California from 2009 to 2017, where he presently continues his relationship as an artist-in-residence. He has taught short workshops at Bath University (U.K.), UC Riverside, UC Berkeley, San Francisco State University, Stanford University, Experimental Theater Wing at NYU/Tisch, Texas Women’s University and others. He co-teaches the workshop “Dance on Land” with his wife Dana Iova-Koga in wilderness environments. In addition, he is the editor of the book 95 Rituals, a tribute to Anna Halprin, and a contributing writer to The Routledge Companion to Butoh Performance.

“Clouds from a Crumbling Giant” Winter 2022

Clouds from a Crumbling Giant, a collaborative performance project, will be presented by the UC Davis Department of Theatre and Dance March 3-5, 2022 in the Main Theater, Wright Hall.