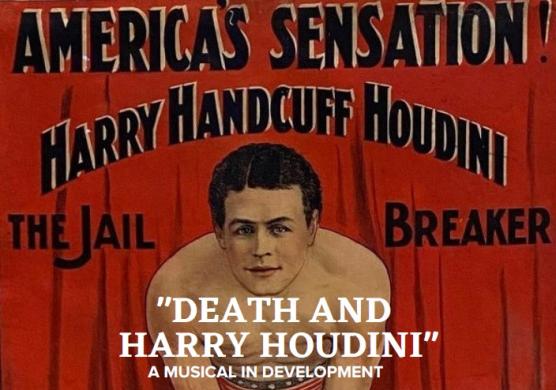 The musical centers on young Erik Weisz, who, after witnessing the death of his father, becomes haunted by death and vows to prove himself its greatest opponent in history. Erik transforms his life to become “Harry Houdini” and uses his skills for showmanship, strength and illusion to prove to death, and himself, that he fears nothing.

“It’s a thrill to bring one of America’s greatest figures to the stage, inspired by Nathan Allen’s amazing original vision,” said Wooden. “Get ready for a fantastic, phantasmagorical adventure.”

Quoresimo, assistant professor of theatre and dance at Southern Utah University and co-founder of Catalyst, said she is pleased to return to UC Davis with another musical project.

“What a privilege it is to be back on campus in the Wyatt Theatre, one of my favorite theatre-making spaces, with this extraordinarily talented cast of UC Davis undergrads,” said Quoresimo. “And after collaborating on Zoom last year, it’s a pleasure to be back in person with composer Keaton Wooden.”

Wooden is a regional Emmy Award-nominated writer, composer, director and social impact producer. As composer, Wooden works with Coyote Joe Stevens as a songwriting duo and composing team for musical theater, film and television. Their musicals The Civility of Albert Cashier, Hills on Fire and Paper or Plastic have been performed across the country.

Launched in 1982, the Granada Artist-in-Residence program brings prominent theater artists — directors, playwrights, choreographers — to UC Davis each academic quarter to teach and create a work for public performance. It is a special opportunity for graduate and undergraduate students to work closely with major theater and dance practitioners.

The Department of Theatre and Dance is part of the UC Davis College of Letters and Science. For information about other department productions, visit theatredance.ucdavis.edu.

Edward Talston-Jackson is a dual native of Hamburg, Germany and Las Vegas, Nevada. Having studied music and dance, Mr. Jackson graduated with a BFA from the University of Nevada, Las Vegas. After the University, he worked with various dance companies as a soloist and guest artist. The latest of those companies is the Paul Taylor Dance Company.