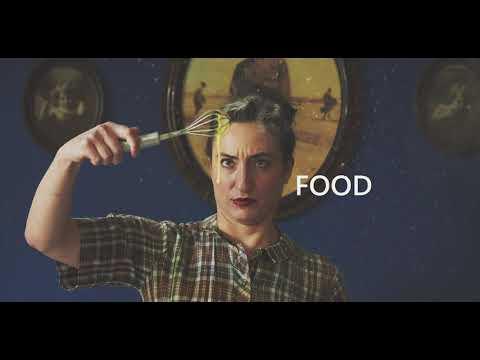 A multisensory performance piece, FOOD offers up a dreamscape cooking show that promises to sate, disgust, amuse and amaze even the most discerning of appetites.

The UC Davis Department of Theatre and Dance production is co-devised and directed by Geoff Sobelle, Granada Artist-in-Residence. The free performance livestreams on March 4, 5 and 6 at 7 p.m. PST.

From the collective minds of UC Davis graduate and undergraduate student artists, and led by theatre artist Sobelle, the FOOD company invites the audience into their kitchens where they have prepared a singular feast of gargantuan proportion. Created specifically on Zoom for a remote audience, the performance is the result of a hive-mind meditation on the fuel that keeps the modern human animal moving through the chaos we call “everyday life.”

“FOOD moves inside and outside of our bodies, our lives, our cultures and our ancient history to explore how the human animal eats,” said Sobelle. “In a visceral, absurdist, highly physical style, the production traces the trajectory of the human sapiens from hunter/gatherer to farmer to consumer, using the theater and audience as wilderness, field and market.”

A theatre artist dedicated to the sublime ridiculous, Sobelle is the co-artistic director of rainpan 43, a renegade absurdist outfit devoted to creating original actor-driven performance works. In 2020, Sobelle co-created and appeared in Elephant Room: Dust from the Stars at the Philadelphia Fringe Festival, which was selected as a Critic’s Pick in The New York Times and presented by the Center Theatre Group in Los Angeles.

The production contains adult language and themes including cannibalism, dismemberment and self-mutilation.