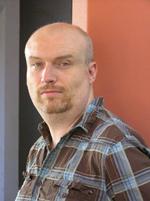 Mark Ravenhill is a playwright known for writing visceral, provocative work regarding contemporary society. His most famous plays include Shopping and Fucking (1996), Some Explicit Polaroids (1999) and Mother Clap’s Molly House (2001). His play, The Cut, opened in 2006 at London’s Donmar Warehouse starring Sir Ian McKellen . It depicts a world dominated by the administering of a surgical procedure.


As Granada Artist, Mark directed his own work, School, prior to its professional premiere at London’s National Theatre. The work explored the “primeval soup” of teenage sexuality. He also directed Nursery, by award-winning playwright Julia Jarcho. Written before the Columbine tragedy, Nursery reveals bored and alienated New York City youths who fantasize a school shooter into a kind of Peter Pan.

An extremely prolific writer, Ravenhill has averaged a play a year since Shopping and Fucking opened to sensational reviews in London in 1996. His second play, Faust is Dead, was produced by ATC in 1997. Sleeping Around, a joint venture with three other writers, opened in Salisbury in February 1998 before being shown at the Donmar Warehouse, London, followed by a national tour. Handbag was produced by the Actors Touring Company in 1998, Some Explicit Polaroids opened at the New Ambassadors Theatre in October 1999, and Mother Clap’s Molly House, with music by Matthew Scott, opened at the National Theatre in September 2001 and transferred to the West End in 2002. Totally Over You was performed as part of the National Theatre Connections Festival in 2003, and Citizenship was written in 2004. In August 2005, Ravenhill performed his monologue Product, about a woman who falls in love with a suicide bomber, at the Edinburgh Fringe Festival.

Described by the London Observer as an “in-your-face writer,” Ravenhill said he certainly hasn’t aimed to shock audiences. “My intent is to look at contemporary life and what is actually happening around us,” he said. “Often that means pushing characters in a situation to an extreme so they can reveal things about themselves. Quite a lot of what happens in School is dark, but that is just the life of teenagers.” After the UC Davis production, School had its professional premiere at London’s National Theatre in March 2006.