Jules Aaron has directed more than 250 stage and television productions including Equus, Death of a Salesman, Macbeth, The Importance of Being Earnest, The Picture of Dorian Gray (world premiere) and award-winning runs of Into the Woods, Cabaret, Company and Merrily We Roll Along. Frequent stage venues include the New York Shakespeare Festival (Public Theatre), the Humana Festival (Actors Theatre of Louisville), South Coast Repertory and Pasadena Playhouse.

Dr. Aaron earned his Ph.D. in Dramatic Literature, Criticism and Theory from New York University. For 17 years, he served as head of the MFA Directing Program at California Institute of the Arts. He has also taught directing, acting and drama at University of California at Riverside, California State University Northridge, New York Institute of Technology and other colleges. He is currently on the faculty of the American Academy of Dramatic Art. He is recipient of the UC Davis Department of Theatre & Dance Granada Artist-in-Residence, Fall 2007. 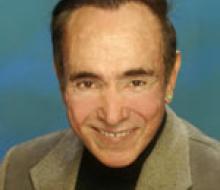