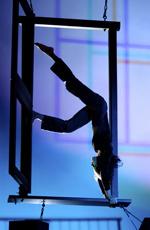 This aesthetic was evident in her Granada production DANCING ON THE EDGE: Awake Now and Then. The moving set, a play on ideas of states of consciousness, formed a series of ladders and doors allowing dancers to interact with the underlying mechanisms of the theatre. “Space is content,” Haigood says, “and the way we interact with a piece as dancers or as an audience – particularly as an audience – is very, very different, depending on the space.”

Haigood relocated to the San Francisco Bay Area from New York in 1979 and co-founded Zaccho Dance Theatre. Her creative work focuses on making dances that use natural, architectural and cultural environments as a point of departure for movement exploration and narrative. Haigood’s works involve in-depth research into the history and the character of sites and typically integrates aerial flight and suspension as a way of expanding the dancers’ spatial and dynamic range.

Her work has been commissioned by leading arts presenters both nationally and internationally. Among them are the National Black Arts Festival, Festival d’Avignon and Festival d’Arles in France, the Exploratorium Museum, Capp Street Project, Dancing in the Streets, the Walker Art Center, Jacob’s Pillow, the San Francisco Art Commission, Kaatsbaan International Dance Center and the Tryon Center for Visual Art. Her choreography has also been commissioned by Alonzo King’s LINES Contemporary Ballet and Axis Dance Company and is in the repertory of the Joffrey Ballet of Chicago.
Ms. Haigood has received many distinguished fellowships for her work as a choreographer and director, most notably from the John Simon Guggenheim Memorial Foundation, the National Endowment for the Arts, the W.A. Gerbode Foundation, the Irvine Foundation and Meet the Composer. She has been also been honored with the 1989 Bay Guardian Local Discovery (GOLDIE) Award, with three Isadora Duncan Dance Awards for performance and visual design and with the 1999 Cal Arts/Alpert Award in recognition of her contribution to the field dance.

Ms. Haigood has taught aerial and contemporary dance forms for 25 years and has had the pleasure of being an Artist in Residence at the Center National De Danse Contemporaine and the Centre National des Arts du Cirque in France; the Laban Centre in England, the Headlands Center for the Arts, Spelman College in Atlanta, and Stanford University.