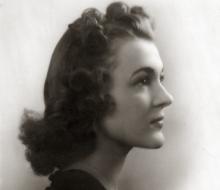 Joy S. Shinkoskey was the mother of Deborah Pinkerton and mother-in-law to Bret Hewitt. They established an endowment to support noon concerts and musical performances in the UC Davis Department of Music.

Mother of four children, including Deborah Pinkerton, Joy Shinkoskey was in her younger years a model and played the piano which is where she developed her love of music, playing Beethoven piano works in the Spokane Music Festival, 1940, and throughout her life.