The Department of Music presents more than 100 concerts each year by a range of ensembles. The department sponsors an annual artist-in-residence program, bringing internationally renowned artists for performances and lectures. The department also presents a free weekly noon-concert series, which features visiting artists, department ensembles, and student performers in an informal setting.

To request the current performance season brochure, or to subscribe to our e-mail events list, please email us.

This concert program is being presented free to the public in memory of the longtime clarinetist and dedicated alumnus Bill Hollingshead, who passed away in 2021.

Written as a powerful sequel to Moscow, 1941, this work changes the narrative, where the theme from Moscow now represents the aggressor, and the heroic people of Ukraine are represented by the Ukrainian National Anthem and the powerful song Prayer for Ukraine.

William Grant Still: Africa, Land of Superstition from the Africa Suite
FIRST PERFORMANCE of this work transcribed for Concert Band

William Grant Still (who never went to Africa) said the Africa Suite was “designed as an American Negro’s wholly fanciful concept of the cradle of his Race, formed on the folklore of generations.” The work is the first of a trilogy focused on the subject of the African American experience.

Julie Giroux: Evening Snow at Kambara from Symphony No. 4 (“Bookmarks from Japan”)

Based on the bookmark “Evening Snow at Kambara” by Hiroshige Ando which is from the series The 53 Stations of the Tokaido Highway.

David Maslanka: Give Us This Day (Short Symphony for Wind Ensemble)

The words “Give us this day” are, of course, from the Lord’s Prayer, but the inspiration for this music is Buddhist. I have recently read a book by the Vietnamese Bhuddist monk Thich Nhat Hahn (pronounced “Tick Nat Hahn”) entitled For a Future to be Possible. His premise is that a future for the planet is only possible if individuals become deeply mindful of themselves, deeply connected to who they really are. While this is not a new idea, and something that is an ongoing struggle for everyone, in my estimation it is the issue for world peace. For me, writing music, and working with people to perform music, are two of those points of deep mindfulness.

USAF Band of the Golden West

Alan Silvestri: Back to the Future

Note: This concert takes place in the Noda Family Lobby and also the front outdoor courtyard at the Ann E. Pitzer Center. It will not be available to view via livestream or on the web.

This concert is a collaboration of graduate students in music composition and creative writing, with artist-in-residence Zachary James Watkins. Watkins has been working with the creative students in a series of workshops, with additional guidance by music department faculty Kurt Rohde and Sam Nichols.

The work has been developing organically using words and electronic media in addition to the musicians.

“See / Hear / Say” is sponsored by the UC Davis Humanities Institute’s “HumArts” Research Clusters, which provides a space for research and collaboration which is not easily accomplished in a single department or program.

Selections to be announced from the stage. 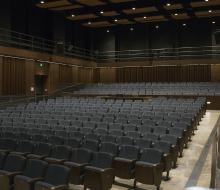 Attending our Events
(Revised Mar. 2022)
During the Pandemic

UC Davis is committed to providing as safe an experience as possible to our greater community—and it recently updated event guidelines on campus.

Masks are no longer required but are strongly encouraged.

Before entry to the venue, we check one of three things (any of the three are acceptable for entry).

Selected performances from the music department’s film archives can be viewed on the department’s YouTube channel.