Former students who majored or graduated in Technocultural Studies or Film Studies have moved on to many interesting jobs and activities. Here we list a few recent news items that have come to our attention. See individual posts for details about their current work and accomplishments.

Drew Moe (B.A. 2007 TCS, Film Studies), is currently working as a cinematographer. See his website for examples of his work and more information.

Victor Diaz Zapanta (B.A. 2006), an early Technocultural Studies student, is featured in an article in the Washingtonion blog. Zapanta works in Washington, D.C., where he is Senior Designer at the Consumer Financial Protection Bureau.

Professor Jesse Drew said, “Victor is officially TCS student Number One,” because he was the very first student Drew signed up for the Technocultural Studies major when it was created.

Solomon Bothwell, a former Technocultural Studies student, appears in an article in the New York Times, in an article about the L.A. radio station he founded, KCHUNG. According to the Times, “KCHUNG Gives Los Angeles Artists a Voice on the Airwaves.”

Read the complete article, “Painting on a Radio Canvas,” to find out more about Bothwell. 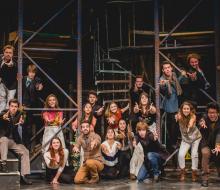