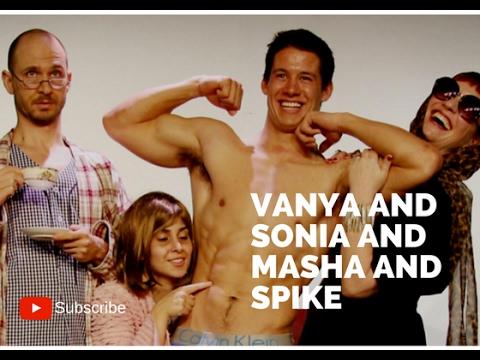 Winner of the 2013 Tony Award for Best Play, Vanya and Sonia and Masha and Spike, is master of comedy Christopher Durang at his best. This wildly funny concoction, which blends characters and themes from Chekhov, centers on the reunion of a glamorous film star of a certain age with her two middle-aged siblings at the family homestead in present-day Bucks County, Pennsylvania.

Vanya and his stepsister Sonia have lived their entire lives in their family’s farmhouse. While they stayed home to take care of their ailing parents, their sister Masha has been gallivanting around the world as a successful actress and movie star, leaving Vanya and Sonia to feel trapped and regretful. Their soothsayer/cleaning woman Cassandra keeps warning them about terrible things in the future, which include a sudden visit from Masha and her twenty-something boy toy Spike.

“Vanya and Sonia and Masha and Spike is Christopher Durang’s wickedly funny play about family, regret, hope and the choices we make in life,” said director Mindy Cooper, Granada Artist-in-Residence for winter 2017. “It’s a riveting farce that tosses Chekhov characters and themes and unexpected wild cards into a blender and pushes the froth button. Anyone familiar with Anton Chekhov’s plays will adore how the writing riffs on those plays, but you don’t need to know his plays to adore this one. You just have to have a sense of humor and two hours. Come see VSMS to laugh and to realize that maybe your family is sane compared to this one!”

There will post-discussion talk backs on Feb. 23 and Mar. 2.

“Hugely entertaining….In its own deliciously madcap way, the new work offers some keen insights into the challenges and agonies of twenty-first-century life.” — USA Today

Here are publicity photographs and set model for the upcoming production of Vanya and Sonia and Masha and Spike. The Tony Award-winning comedy plays the Main Theatre, Wright Hall, Feb. 23-25 and Mar. 2-4, Thursday through Saturday at 7 p.m. with 2 p.m. matinees on Feb. 25 and Mar. 4.