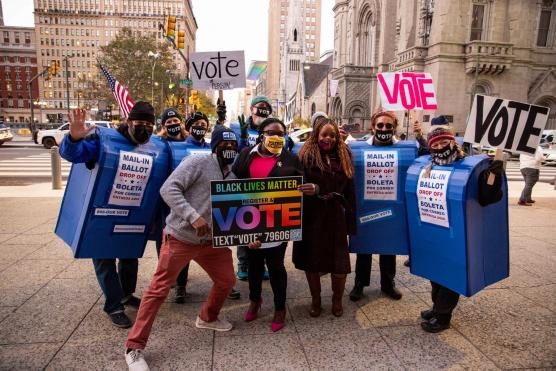 Professor Larry Bogad, theatre and dance chair, is the artistic director and producer of the project Delivering Democracy. The troupe, which has been focused in the battleground state of Pennsylvania, features dancing mailboxes/ballot drop boxes and has entertaining folks by dancing to a reworked version of the pop tune “Please Mr. Postman” and distributing accurate voter information.

The project was Bogad’s concept. He received grants to make the project a reality for the Center for Artistic Activism and recruited theatre people from several great groups to make it happen. These flash mob-style performances were initiated and developed by Bogad at UC Davis/Center for Tactical Performance and the Strike Anywhere Performance Ensemble in New York City, with national support from the Center for Artistic Activism as part of their Unstoppable Voters Project.

“We wanted to have dancing mailboxes, and then when it was too late to mail in our vote, dancing ballot boxes, to provide a vital message of voter encouragement in the face of voter intimidation and disinformation, in a uplifting and playful way,” said Bogad.

“It’s been a superb collaboration with the brilliant artists of Strike Anywhere and Farm Arts Collective,” said Bogad. “We put together costumes, music, choreography, and made what I like to call an irresistible image as we danced around public spaces and polling places in towns in northeast Pennsylvania and Philadelphia.”

“We’ve gotten a lot of attention,” said Bogad. “We have a cameo in a video with a Taylor Swift soundtrack for voting rights, we were just in a CBS spot about artistic activism, and, so far, have had six photos in The New York Times and counting. In Scranton, PA, we were interviewed by a few American crews but also Belgian, Brazilian, Dutch, French, and British journalist crews.”

“It’s been great to have our dance on national and international networks with our message that uplifts democracy and opposes authoritarian disinformation and the discrediting of our democratic system with a self deprecating sense of humor…but more important is the sense that we are entertaining people who are nervous and agitated and waiting in line to vote… Were the times we’ve been able to entertain people at a rally for human rights or Black Lives Matter with our absurd but pointed schtick. I think that making beautiful trouble is the way to go in these times. Nonviolent creativity and art have a role in collaboration with social movements to preserve our democracy in the face of the greatest threat it has faced in recent history.”

“There’s another side to this. In the face of hostility from authoritarians, there’s something very disarming about being a silly dancing ballot box. It puts the potentially violent or aggressive person in an awkward position; if they start yelling at us they do eventually realize they look ridiculous for yelling at a dancing ballot box.”

Delivering Democracy is a vibrant and uplifting voter information campaign designed to help voters across Pennsylvania know how and where to vote safely, expanding participation in democracy. Performer-citizens will provide flyers with accurate information about how voters in the county can vote by mail, drop off their ballots, or vote in person.