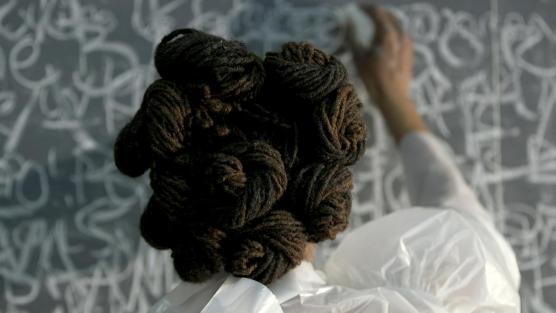 Performed within an actual teaching theatre where typically scientists lecture on their findings, this work poses a dialogue between African-American social dance and artistic practice as an accumulated knowledge bank. The ’see-through’ Victorian Costume, worn in this work continues a creative exploration of authorship, spatial awareness, and cellular memory.

Visually inspired by classical Hollywood imagery that floods the works of American playwright Kennedy, her body of work features protagonists who are highly educated, acculturated African American academics find themselves teetering on the edge of the ‘metaphysical dilemma’ that is in the margins where both living inside and outside of the academy are squeezed. Kennedy, interrupts ‘the system’ of the well-made play with long poetic, cinematically described stage directions.

Julie Wyman’s 2012 documentary film STRONG! (75 min, HD) continues her visual investigation of cultural and media constructions of health, weight, gender and body image. STRONG! premiered to sold-out houses and standing ovations at Silverdocs 2012, screened in theaters nationally, and was broadcast nationally as the closing film of the tenth season of PBS’s Emmy award-winning series Independent Lens, where it won the series’ Audience Award.