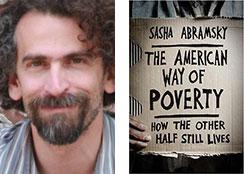 As our upcoming production of The Grapes of Wrath celebrates the 75th anniversary of the publication of Steinbeck’s novel, we will be hosting a symposium on Friday, March 7, to explore the work directly as well as the larger social, cultural and historical issues it raises.

Participating UC Davis scholars and historians include Sasha Abramsky, author of “The American Way of Poverty: How the Other Half Still Lives” (one of the New York Times 100 Most Notable Books of 2013), who is a freelance journalist and part-time lecturer in the University Writing Program and research affiliate with UCD’s Center for Poverty Research.

The symposium, open to the public and free-of-charge, will be held in Lab A, Wright Hall.

Marianne Page, Professor of Economics and Deputy Director of the Center for Poverty Research

The Grapes of Wrath Symposium at UC Davis explores social, cultural and historical issues, then and now Updated March 3, 2014

The UC Davis Department of Theatre and Dance will host The Grapes of Wrath Symposium on Friday, March 7, to explore John Steinbeck’s work directly as well as the larger social, cultural and historical issues it raises, while celebrating this 75th anniversary year since the publication of the epic novel. The symposium, open to the public and free-of-charge, will be held in Lab A at Wright Hall from 10:30 a.m. to 5:45 p.m.

Miles Anderson has been acting on stage and screen for many years. Trained at the Royal Academy of Dramatic Art, he recently completed his third season at the Old Globe Shakespeare Festival in San Diego where his roles have twice won the San Diego Theatre Critics Circle Craig Noel Award for Outstanding Lead Performance in a Play: Shylock in The Merchant of Venice and King George in The Madness of George III.

The Grapes of Wrath Cast in order of appearance:

The Grapes of Wrath Photo Gallery