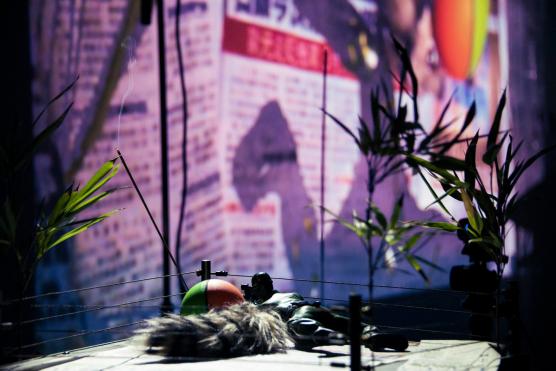 The newest work from Bob Ostertag’s multi-decade collaboration with Quebecois animator Pierre Hébert is Shadow Boxing. The performance involves an amplified boxing ring, live animation, gamepads, toy animals, toy weapons of war, fire, video footage shot in the town of each performance, and the newspaper from that town on that day. The world premiere of Shadow Boxing was presented at the International Beethoven Project Festival in Chicago in 2012, followed by a 6-week tour of China, Taiwan, Hong Kong, Vietnam and Thailand in 2013. Shadow Boxing has yet to be performed in Europe or Canada. Pierre Hébert travels from Montreal.

In April 2014 Ostertag will again be on tour, with shows in Detroit, Istanbul, Venice, Bologna, Zurich, and Berlin.

See the link at right for images from his Asian tour and other performances.