As a journalist, his writings on contemporary politics have been published in many languages. Electronic instruments of his own design are at the cutting edge of both music and video performance technology.

Born in Albuquerque in 1957, he dropped out of the Oberlin Conservatory after two years, settled in New York City in 1978 and immersed himself in the “downtown” music scene of the period. He left music in 1980/81 to work in Central America, and became an expert on the region, with writings published in Asia, Africa, Latin America, Europe, and the United States. In 1988 he moved to San Francisco and resumed his musical activity. His radically diverse collaborators have included the Kronos Quartet, avant-garders John Zorn and Fred Frith, heavy metal star Mike Patton, jazz great Anthony Braxton, dyke punk rocker Lynn Breedlove, drag diva Justin Bond, filmmaker Pierre Hébert, and others. He is rumored to have connections to the shadowy media guerrilla group The Yes Men.

The multi-talented Bob Ostertag, composer, performer, instrument builder, journalist, activist, historian, and kayak instructor, will appear in concert in Wels, Austria, November 11 and 12. Ostertag performs along with Jon Rose and Gerry Hemingway. His latest recording is entitled Wish You Were Here.

Ostertag’s appearance in Austria is part of a world tour that began in 2015.

Music Monday is a weekly SmartShanghai column that presents songs from bands making music in China and bands living in, coming to, or thinking about coming to China.

Click here to read the entire article on Bob Ostertag and his career.

The newest work from Bob Ostertag’s multi-decade collaboration with Quebecois animator Pierre Hébert is Shadow Boxing. The performance involves an amplified boxing ring, live animation, gamepads, toy animals, toy weapons of war, fire, video footage shot in the town of each performance, and the newspaper from that town on that day. The world premiere of Shadow Boxing was presented at the International Beethoven Project Festival in Chicago in 2012, followed by a 6-week tour of China, Taiwan, Hong Kong, Vietnam and Thailand in 2013.

In 2006 I gave my music away. That music had previously existed on CDs and LPs (yes, I began making music in the days of vinyl and tape). I moved all of it to the Web, downloadable for free.

Today, seven years later, I see that giving away music for free is not as easy as I had imagined. In some ways, it turns out to be impossible. The reasons why this is so say a lot about creativity,property, and power in a networked world of corporately owned digital commons policed by netbots and stochastic algorithms.

Raising Expectations (And Raising Hell): My Decade Fighting for the Labor Movement was named by the Nation Magazine as the Most Valuable Book of 2012, on its Progressive Honor Roll. The Nation admired the spirit of this “memoir/manifesto, which calls for putting the ‘movement’ back into the labor movement.”

The UC Davis Sound Lab is a place where students and faculty come together to make electronic music and sonic art. The Lab’s co-organizers are Bob Ostertag from the Cinema and Digital Media department and Sam Nichols from the Department of Music. Since the early 2000s we’ve been teaching a variety of classes on the creation of electronic music and sonic art. In 2015 we began teaching these classes in a new space, a converted warehouse located in the Art Annex. 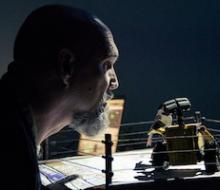