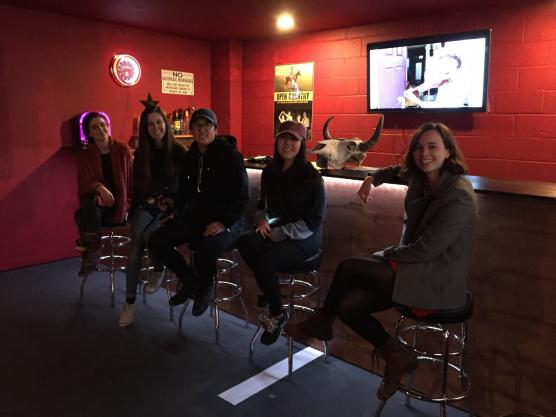 ArtStreet features installation artworks by about 100 artists and is located in a soon-to-be demolished warehouse near downtown.

Their immersive, interactive FilmBar showcases various aspects of the Drew’s film project “Open Country” about the political and social roots and content of country music. Playing in the bar are videos of interviews they did with musicians including Hazel Dickens, Utah Phillips, Peter Seeger and Billy Bragg along with historical videos of Merle Haggard, Jeannie C. Riley and others.

During the run of ArtStreet the two will often be at the bar, with Jesse Drew talking to “customers” about the project and Glenda slinging free root beers and talking to the barflies.

Six UC Davis undergraduate students from cinema and digital media and design, interned with the Drews to assist in transforming the raw, trash-filled spot into a cozy welcoming bar with red walls and dim lights.

Their work on country music is an attempt to uncover its often-overlooked history as part of progressive and populist movements. “The roots lie firmly in classic American traditions of resistance to capital, freedom from government interference, and in defense of the right of workers, poor farmers, and the dispossessed to live their lives in dignity,” the Drews have written. “Much early country music was written from the perspectives of Southern tenant farmers, Appalachian coalminers, working Southwestern cowboys, Western farmworkers and other marginal poor folk.”

ArtStreet is open through Feb. 25.

Jesse Drew’s research and practice centers on alternative and community media and their impact on democratic societies, with a particular emphasis on the global working class. His audio-visual work, represented by Video Data Bank, has been exhibited at festivals and in galleries internationally. His current film project is Open Country, a feature documentary on the politics of American Country music.