Glenda Drew is a critical maker whose research is based at the intersections of visual culture and social change, with a particular emphasis on the working class. The content of her work is rooted in creating messaging with greater social implications, fostering innovation and encouraging behavior change. Her subjects include country musicians, waitresses, feminists and precarious workers. Her practice is multifaceted in form and includes film/video, motion graphics, photography, graphics, interactivity and audience participation. She is inspired by the creative possibilities technologies generate and she works with a combination of tools considered “hi-tech” and “lo-tech.” She approaches her work with an organic sense of play, exploration and curiosity tempered by the design discipline with the goal of making meaningful work.

Drew was an active member of Paper Tiger Television in San Francisco for several years, a defining experience that continues to anchor and shape her work, from the DIY aesthetic and approach aimed at unpacking media technologies, to creating accessible media that asks critical questions about media. She is a co-PI on the UC Placemaking Initiative.

Drew exhibits her work nationally and internationally. Recent exhibitions include Unprecedented Times: Protest, Pandemic and Essential Workers at Silicon Valley De-Bug (San Jose),  Memories of a New Future at the Barn Gallery (Woodland), Cliteracy at the Manetti Shrem Museum of Art (Davis), PL!NK at the Crocker Museum of Art (Sacramento), pixeldust at ISEA 2017 (Colombia, South America). Her work has been featured in Leonardo, Bitch! A Feminist Response to Pop Culture magazine and The Washington Post.

Drew exhibits her work nationally and internationally. Current and recent projects include

More of Drew’s work can be seen here: http://www.glendadrew.site

Professors Glenda Drew, design, and Jesse Drew, cinema and digital media, and lecturers Alexa Bonomo and William Mead, design, have created work that is featured in the installation “memory.unshift( )” at the Axis Gallery in Sacramento.

The UC Davis Placemaking Team has created a participatory initiative that invites the public to respond to the prompt “Home is ____” through words and images.

Faculty and Alumnus Look to the Future in Exhibition

Professors Glenda Drew, Department of Design, and Jesse Drew, Department of Cinema and Digital Media, have created new works using innovative technology that are featured in “Memories of a New Future,” an exhibition at the Barn Gallery in Woodland. The installation also includes work by Melissa Chandon, lecturer in Design, and Chris Daubert, MFA Art Studio (2018).

Professors Glenda Drew, design, and Jesse Drew, cinema and digital media, are members of Class Conscious Photographers, who recently installed “A WORKING LENS (A.W.L.)” in front of the John Natsoulas Gallery in Davis. The installation examines the lives of “essential” workers during the pandemic.

Students from the Department of Design have created “Wonder Wander,” a one-day exhibition, in support of the 2018-19 Campus Community Project, featuring “The Book of Joy: Lasting Happiness in a Changing World” by the Dalai Lama, Desmond Tutu, and Douglas Carlton Abrams.

PL!NK at the Crocker Museum

Glenda Drew and Jiayi Young’s PL!NK is a sensory-based, interactive installation, based on light, color, reflection and participation. Read more information at plink.rocks. PL!NK is on display at the Crocker Museum in Sacramento until October 29!

Professors Glenda Drew and Jiayi Young will present a guest lecture at The Hong Kong Polytechnic University with undergraduate students, Michelle Lee and Darin Reyes. The group will give a public talk, tour the multitude of design labs and meet with the dean, Cees de Bont (who is also the co-Director of ISEA 2016, a conference the four are presenting at in Hong Kong).

How long have you been with the Design department?
10 (sometimes blissful!) years

What other, if any, professional work positions have you held?
I have been a community educator, web designer and waitress!

Where could we find examples of your work?
Well, someday I will update my website…maybe this summer…redrocketmedia.com/glenda

On May 15 2013, a vanload of UC Davis Design and Computer Science students made its way over the Grapevine and into Los Angeles to participate in a hack-a-thon to lend their skills and creative/critical thinking towards helping the millions of workers in the US who survive on low wages, no healthcare, no job stability and little respect from their employers. 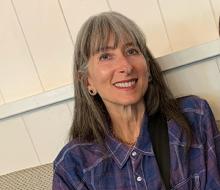