Jiayi Young is an Associate Professor of Design at the University of California, Davis. Her inquiries lie within the emergent and experimental field of digital media with an emphasis on the cross-disciplinary areas of design that integrate the arts and the sciences with cutting-edge technology. Her current research and creative work are focused on constructing data-driven sensor-enabled interfaces, installations, real-time projection graphics, participatory performances, and immersive environments in cultural and public places with a goal of creating generative energy to engage the public in social dialogue. Using multidisciplinary approaches, her work examines contemporary society including the culture of consumption, the programming and exploitation of the feminine, cultural assimilation, and personal identity. Leveraging social media, crowd-sourced media, and user-created content, she sets up scenarios and creates conditions to make visible empathetic relationships between people in the presence of contemporary culture. Her work invites the public to participate and to come in close contact with an experience that engages the rethinking of the present-day human experience.​

Project Echo is a public participatory art project where the real and profound personal concerns of the everyday meet the fabrication of the fake.

Love in the Dialectic of Vanity is a temporary public art project where the human and the machine coproduce Tanka poems. Tanka originated in seventh-century Japan and is one of the oldest Japanese poetry forms. It consists of 31 syllables and takes on a five-line 5/7/5/7/7 syllable count form. Because of its economy and immediacy, it is an ideal form for swift, and sometimes intimate and intense, emotional expressions. Lovers in ancient Japan, after a night of courtship, are known to exchange Tanka poems for expressing gifts of gratitude.
Read More >

Useful Fictions is a week-long symposium and a public participatory art project in Paris. It is a platform to embrace complex problems by modeling radical openness to research in which tools, laboratories, studios are shared between artists and scientists to expand concepts for ecological thinking. Useful Fictions proposes to see the calculation of a catastrophic future not as an inevitability but as an invitation to innovate and effect change.
Read More >

This project, with its multiple phases, transforms the 2016 United States Presidential Election Twitter data into a large-scale installation to probe the question of how artificial intelligence via the ways of social media assumes form and transforms the shaping of the future of a nation.
Read More >

Transduction is a participatory stage performance. It freezes an everyday moment in the present time where exact surveillance, identification, and cataloging of the human experience in bite-size chunks seem to threaten individual autonomy meanwhile laying open an often overextended position of reverberation of the self existing in illusional amplification. The work invites audience participation to collectively compose in the precarious balance between self-exposure, surveillance, narcissistic tendencies, and identity construct, and provokes questions about the relationships between people and a technologically integrated landscape situated in an age-old question of the human condition of loneliness and isolation.
Read More >

​Inspired by kaleidoscopic configurations, PL!NK is a large-scale, site-specific, interactive installation that immerses children and their caregivers in a visual experience dazzling in color, light, and reflection. An age-old, visual, interactive, and immersive medium, kaleidoscopes are some of the original devices of wonder that alter reality by elevating vision; they continue to fascinate audiences across age and language boundaries. PL!NK inverts the kaleidoscopic experience by reversing the relationship between viewer and object by inviting the viewers to enter into the inner structure of a kaleidoscope and immerse themselves in an expanded field of mirrors and transparent color facets combined with interactive audio and video stations. As viewers explore the installation, their movements and interactions generate form and content in real-time. The participation of the viewers amplifies the complexity of the experience.
Read More >

This project is a multi-dimensional soundscape that maps migration tracks of pelagic (open-ocean) species over time and across geographic locations. Phase I and II mapped one predator and three prey over the course of a two-year period, in the environment of their corresponding sea surface temperature (SST) changes. In the presence of the pressing concern of overfishing, phase III of the project maps migration tracks of Bluefin tunas in the context of fishing vessel routes in the Pacific Ocean. The goal of the immersive installation is to engage the public to experience a visual and audible environment that reflects marine lives in the oceans.
Read More >

Shoptalk: Field Tools for Critical Making is a workshop in which participants practice methods of thinking and making to promote social resiliency, art for social change, and participatory action for peace. This workshop gives participants the opportunity to collaborate and build their own field tools and explore new approaches to making. Workshop leaders start with short presentations about their own community arts practices and case study overviews. Workshop participants then have the opportunity to introduce themselves and brainstorm topics and mediums to create projects.
Read More >

I am interested in the role public participatory environments play in contemporary culture as social acts or popular practices that shape cultural beliefs. In this interdisciplinary project, I seek to make connections across the humanities, from historical literature to contemporary art and dance, to design and craft a large-scale environment that is a hybrid of an interactive art installation and a stage performance to understand the significance of public participatory social act in the medieval aesthetic past, in turn, to examine the socio-historical and cultural framework of past cultural traditions in relationship to the present. This project enlists an exemplary medieval performance tradition of the danse macabre (“the dance of the death”), as a case study, to probe the relationship between performance-oriented social participatory act and the inaccessible. Medievalists have long lamented the limits of historicist methods to reconstruct a far distant aesthetic past. This project reenacts a contemporary interpretation of this medieval tradition.
Read More >

Associate Professor Jiayi Young and graduate students from the UC Davis Department of Design are presenting their research at “Possibles,” the 2022 ISEA International

Jiayi Young in Past, Present, and Future

Jiayi Young, assistant professor of Design, is featured by Axis Gallery as part of the online exhibition series “PAST, PRESENT, and FUTURE, a celebration of Axis Gallery.”

Focusing on togetherness in this time of self-isolation, the installation features current and past members of the gallery who share their experiences of being a member and part of a collective. Young is paired with artist Benjamin Hunt.

The Leonardo Art, Science, Evening Rendezvous (LASER) talks at UC Davis are evening presentations that engage the public as participants in conversations with artists, designers, scientists, and technologists making significant contributions to their fields. The evenings are designed to encourage unexpected juxtapositions between seemingly unrelated projects, facilitating the interdisciplinary conversations that engage the challenges of the 21st century.

PL!NK at the Crocker Museum

Glenda Drew and Jiayi Young’s PL!NK is a sensory-based, interactive installation, based on light, color, reflection and participation. Read more information at plink.rocks. PL!NK is on display at the Crocker Museum in Sacramento until October 29!

The Provocative Installations of Jiayi Young

Jiayi Young, assistant professor of Design, has created installations that used social media data from the 2016 Presidential Campaign as the basis of her art. Her unique and provocative works have sparked controversy and discussion. The College of Letters and Science website features an overview of Young’s recent, current and future projects.

Professors Glenda Drew and Jiayi Young will present a guest lecture at The Hong Kong Polytechnic University with undergraduate students, Michelle Lee and Darin Reyes. The group will give a public talk, tour the multitude of design labs and meet with the dean, Cees de Bont (who is also the co-Director of ISEA 2016, a conference the four are presenting at in Hong Kong).

The UC Davis Humanities Institute is excited to spotlight Jiayi Young, a new Assistant Professor of Design at UC Davis. Professor Young was recently selected by the Sacramento Metropolitan Arts Commission (SMAC) as a finalist for the Golden 1 Center Public Art Program. Young and three other finalists were invited to submit design proposals for the LED screens at the entrance to the Golden 1 Center. This program is funded by a $1.5 million private donation, the largest commitment to regional artists in the history of the City’s Art in Public Places program. 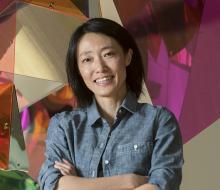