Andrea Weber was a dancer with the Merce Cunningham Dance Company through its final eight years, performing roles in over 25 works. Andrea received her BFA from The Juilliard School under the direction of Benjamin Harkarvy. She has danced and taught for Canadian-based Coleman Lemieux & Compagnie, participating in the Manitoba and Gros Morne Projects, and returned to Canada this summer to perform in Banff National Park.

Andrea appears as the Dancer in “The Dancer Films,” a series of very short films based on the cartoons of Jules Feiffer, directed by Judy Dennis and produced by Ellen Dennis, with choreography by Susan Marshall and Larry Keigwin. She has assisted and staged Lila York’s works on ballet companies throughout the USA and in Denmark. Andrea was a collaborator in Anne Carson’s Possessive Used as Drink (Me) and has also danced with Jessica Lang, Jonah Bokaer, and Charlotte Griffin. She is on faculty for the Merce Cunningham Dance Studio and has taught at Brown University and ADF. 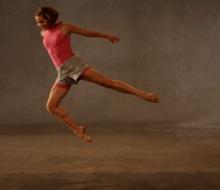