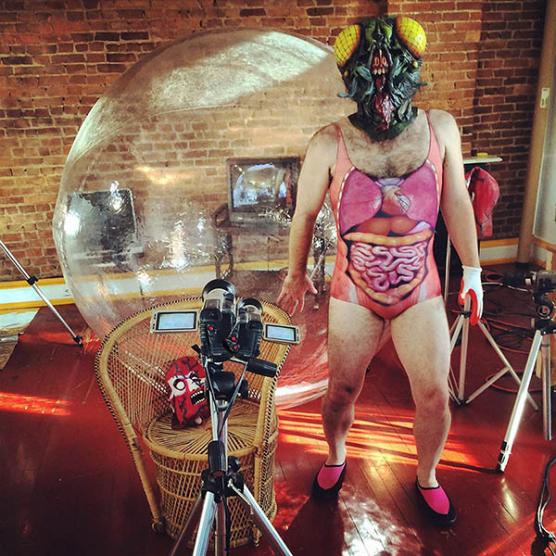 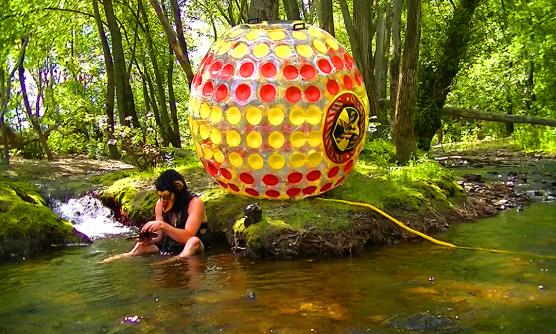 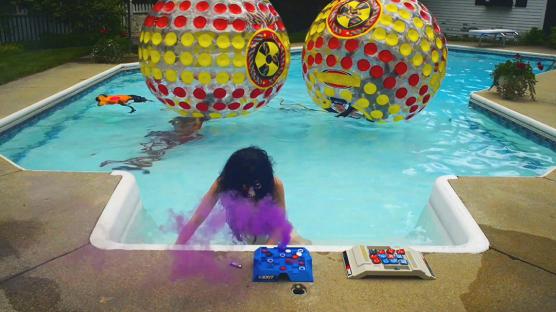 ARK 3: The Workshop Scenarios is a variable installation and single channel video project collaboratively produced by Darrin Martin and Torsten Zenas Burns. The first part of the title takes its name from an obscure and short-lived children’s television series named Ark II from 1976 where a group of young scientists accompanied by a talking chimpanzee attempt to bring new hope to a post-apocalyptic world that has been ravaged by pollution and waste. Their science fiction mobile lab roams a landscape populated with feral children, feudal barons, and supernatural beings.

In ARK 3: The Workshop Scenarios, Martin and Burns re-imagine this mobile lab to be colorful inflatable orbs, and its occupants, as performed by the artists and willing workshop participants are evolved bodies rather than glamorous youths. Void of their protective hides and genetically modified to be in communion with the animal and insect worlds, these earth bound bio-nauts mine the environment around them looking for clues to their ancestral past as a way to pave a way into their possible simulated futures. In their search, they discover recordings of Leonard Patrick Nimoy O’Neal introducing Laser Disc & CED technologies to a broader public. They also see early clues to their semblance in the images of the iconic anatomical human, the singing educator Slim Good Body and a cinematic fly head from 1986.  Other ancestral simulations take the form of Burn’s Wiccan mother and Martin’s gay cop father, both of whom act as spirit guides to the future explorers. Scenes and sonic treatments will be remixed but held together by the exploratory strand of the Ark’s original mission of bringing the rationality of the pseudo scientific method back into human consciousness.

EVENTS:
Saturday, August 1st, 2-5pm:
Opening with Feral Child/Ancestral Animal Spirits Séance/Past Life Regression Session.
Opening of ARK 3 includes live improvisational performance/
action toward the later hours facilitated by Burns and Martin and special guest performers Beatrice Thomas and Kevin Seaman as the medium guides.  Audience and workshop participants will be filmed for scenes to include back into the larger project.

First Friday, August 7th, 6-9pm:
Anatomical Quivering. For the latter half of First Friday hours choreographer, Christian Burns, will be working with artists and a handful of workshop participants to conduct an improvised body movement that will make its way through the gallery and beyond. Audience and workshop participants will be filmed for scenes to include back into the larger project.

Thursday, August 13th, 6-9pm
Scene Integration Presentation.  Burns and Martin present an altered version of parts of the current installation that will include elements from the two workshops and additional material.