Field of interest: History and Theory of Architecture, Design and Science

After finishing her second book Toward a Living Architecture? Complexism and Biology in Generative Design (2019), she is now researching and teaching facets of biodesign theory and practice. During Winter and Spring 2019 and 2018, along with biomedical engineering professor Marc Facciotti and biologist Dave Furlow, she is preparing student teams from UC Davis to compete in the Biodesign Challenge Competition. She works with living materials to teach students to think differently about design practice, life cycle analysis, and sustainability.

She is the author of Toward a Living Architecture? Complexism and Biology in Generative Design, on generative architecture and design in relation to recent scientific theories of self-organization and emergence, development and evolution, and complex adaptive systems (University of Minnesota Press, January 2019); Eugenic Design: Streamlining America in the 1930s (2010/2004), winner of the 2006 Edelstein Prize for outstanding book on the history of technology; and co-editor of the anthology Popular Eugenics: National Efficiency and American Mass Culture in the 1930s (2006).

Her work is included in the anthologies

Her work is published in the journals

Christina Cogdell is Professor of Design, specializing in history, theory and criticism, and a Chancellor’s Fellow at the University of California at Davis.

At UC Davis, she teaches interdisciplinary classes in Design history/ theory/criticism, Biodesign, Art History, Cultural Studies, and American Studies.
These include seminars on:

Her large undergraduate lecture courses are:

And upper-division seminars include:

She previously has taught at the University of Pennsylvania, College of Santa Fe, and California State University – Fullerton.

University of California at Davis

The Department of Design includes an undergraduate program (B.A.), a graduate (M.F.A.) program, the Design Museum and Collection, and the California Lighting Technology Center (CLTC), which plays a leading influence on the State of California’s energy efficiency policies (https://cltc.ucdavis.edu/). We are the only comprehensive design department in the UC system, with all major design subdisciplines except architecture. We have 16 ladder faculty, 7 continuing lecturers, 18 lecturers, 4 staff positions, 20 graduate students, almost 800 undergraduate majors. This year I am teaching 1096 student credit hours; even though I receive one course release per year for being Department Chair, I have taught as overload for the last three years two additional courses per year to prepare students for the Biodesign Challenge competition. The Chair is responsible for all aspects of program operations and works in close collaboration with the Chief Administrative Officer of the Arts Group on the budget and the academic personnel staff under the Associate Dean of Humanities, Arts and Cultural Studies and the Dean of the College of Letters and Science. Major accomplishments: During my time as Chair, our undergraduate majors have grown from around 500 to almost 800 students, entailing significant increase in courses, lecturer positions, and a successful search for a new faculty member. The two faculty who led the CLTC have retired and we are searching for a new Director (who will also be a faculty member). While we removed tracks in our major before I became Chair in order to foster the training of more interdisciplinary designers, I have worked with faculty and advisors to increase clarity for students of their curricular options through our program. I have worked with faculty and lecturers to expand inclusion of nonwestern design and nonwhite designers in course content in order to move forward the decolonization of design. I oversee our mentoring program for junior faculty, and I am responsible for hiring all of our lecturers each year. We are under construction on a $17.1 million renovation of our building, which will almost triple our current critique and maker space when finished; we will share part of this renovated area with the Department of Cinema and Digital Media beginning in 2021. With the Letters and Science Development team, we brought in an estate gift worth $3.8 million for the Design Museum and Collection and a $250,000 starter gift for furniture and equipment for the new maker spaces in Cruess Hall Phase II.

Our MFA program started in 2009 with only a few students per year. While I was chair, the university offered a masters growth incentive program; by participating and increasing our students from 5 to 17, I grew the graduate budget by $60,000 per year. I oversaw the graduate curriculum, MFA committee, admissions, funding, and TA assignments (discussion sections with lecture courses and studio TA positions). The Dean’s office increased studio TA funding two- to three-fold during my leadership. During this time, I also increased the diversity of our graduate student body from 50%-50% white/Asian American (100% domestic) to 32% white domestic, 16% Asian American, and 53% international (China, Iran, S. Korea, India, and Saudi Arabia).

As one of only six faculty representatives for the entire College of Letters and Science (around 900 faculty) over the last five years, I have worked with divisional and college leadership teams through the reorganization from three divisions with three deans, to one college with one dean. During her term the last three years, Dean Spiller has almost erased the college’s structural debt of $9 million. As part of this executive committee, I have reviewed and approved academic policy manual revisions, numerous changes to majors and minors, and Academic Senate requests; we have been consulted on UC-wide policy changes, and debated proposals for an undergraduate business major and the start of Data Science at UC Davis. As a representative for the Division of Humanities, Arts and Cultural Studies, I have worked closely with faculty representatives from the Division of Social Sciences and Division of Mathematical and Physical Sciences. Along with being departmental chair, this has been my primary training ground for college level leadership.

Member of Appointed Letters and Science Reorganization Work Group, Office of the Provost (Winter and Spring 2015)

This intensive and insightful two-quarter committee met over forty hours to investigate the pros and cons of reorganizing the College of Letters and Science from having three Divisional deans to having only College one. We interviewed Deans and top administrators at five comparable universities to discern the challenges of such a transition and potential benefits of doing so. Our final recommendation to move to the single dean model was not preordained, and through the process of arriving at this conclusion, I began to articulate the qualities of leadership that I admire and respect that are necessary for success among a diverse group of scholars, with different budgetary and infrastructural needs, from many different disciplines.

In this position I was responsible for advising about 30 undergraduate art history majors on their progression through the program from lower-division to upper-division coursework, as well as serving as an empathetic listener for career concerns they had.

CAMPUS SERVICE (beyond those listed under Administrative Experience)

CURRENT AND PAST EMPLOYMENT

Chair and Professor of Design, Department of Design, University of California at Davis, July 2009 – Present.

DES 221 Theories and Issues in Design

DES 40A Energy, Materials and Design Across Time

CST 295 Self-Organization and Emergence in the Humanities, Arts, and Social Sciences

AHI 188B History of American Architecture

AMS 160 Seminar: History of Eugenics in America, 1890 to the Present

AMS 030 Images of America and Americans in Popular Culture

History of Eugenics in America, 1890 to the Present

History of Art, Architecture, Music and Poetry from Renaissance to Modern

Spanish, some French and German

Undergraduate student Amabel Gale, a double major in computer science and design, was part of a team representing UC Davis at this year’s Biodesign Challenge Summit. The collaborative project “Sea Glass,” which harnesses microalgae to filter agricultural wastewater and, at the end of its use, the algae is converted into a bioplastic for eyewear, was presented by the team.

How long have you been with the Design department?
Since Fall 2009

Where could we find examples of your work?

PARAMETRICISM has been heralded as the new avant-garde in the fields of architecture and design – the next ‘grand style’ in the history of architectural movements. Parametric models enable digital designers to create complex structures and environments as well as new understandings of space, both real and virtual.

Whether as tools for democratic action or tyrannical spectacle; self- and community-building capabilities; a post-humanistic subject; or, the mediatized politics of our various futurisms – all these themes are figured within the Parametricist discourse. 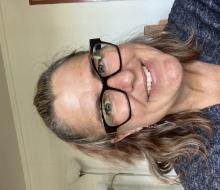