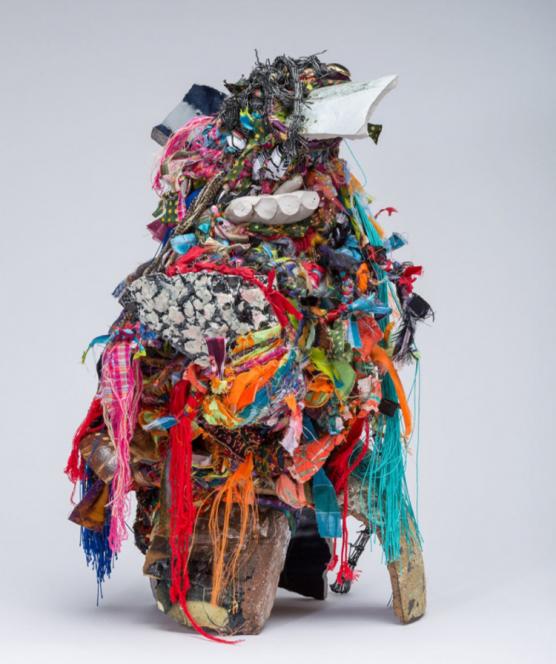 Growing up in Jim Crow South during the Civil Rights Movement, Ramekon O’Arwisters had a safe haven, quilting with his Grandmother where he was “embraced, important and special.” These early memories prompted his nascent series of unique crocheted/ceramic sculptures titled, Mending. Employing ordinary household, or decorative pottery, broken and discarded, O’Arwisters combined traditional crafts into a dimensional woven tapestry, stripping both cloth and ceramic of their intended function.

In his new series of sculptures titled Cheesecake, the works have transformed from something broken, needing mending, to fully determined and self-aware. Being Black and Queer, the full complexity of the moniker Cheesecake, used to objectify an attractive, sexualized man or woman is not lost to O’Arwisters. Instead he embraces it, subverting the demeaning implication in describing his said, “objects”. Combining lacy, embellished fabrics with ceramics contributed by students and faculty from California State University at Long Beach, O’Arwisters sculptural hybrids embody both danger and seduction in his bold ‘coming of age’ works.

Ramekon O’Arwisters is the founder of Crochet Jam, a community arts project infused with folk-art traditions that foster a creative culture in cooperative relationships. Born in Kernersville, North Carolina, O’Arwisters earned a M.Div. from Duke University Divinity School in 1986. He was an artist-in-residence at the de Young Museum, the Djerassi Resident Artists Program, and the Vermont Studio Center. Grants and Awards include Artadia: The Fund for Art and Dialogue, NY, the San Francisco Foundation and the San Francisco Arts Commission Cultural Equity Program. He received the 2014 Eureka Fellow, awarded by the Fleishhacker Foundation in San Francisco. His work has been featured in the LA Times, San Francisco Chronicle, 7×7 Magazine, Artnet, and the San Francisco Examiner.