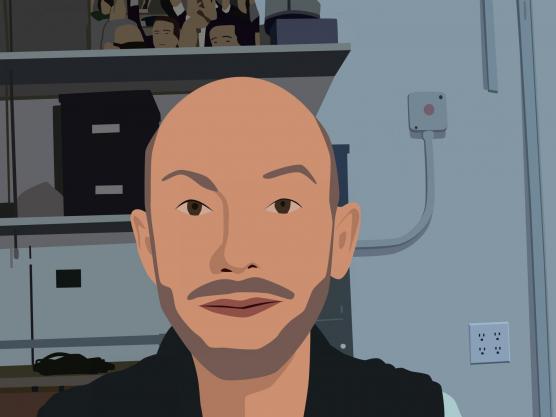 Kota Ezawa’s work explores the appropriation and mediation of current events and images, referencing sources from the news, art history and popular culture. Ezawa, the second guest speaker in our Visiting Artist Lecture Series, is known for creating light boxes, videos and works on paper that distill found images into his signature pared-down, flattened style. By reducing complex visual information to its most essential, two-dimensional elements, Ezawa explores the photographic record’s validity as a mediator of actual events and experiences. His work “National Anthem” (2018) which was drawn from broadcast footage of NFL athletes protesting police violence and the oppression of people of color, was included in the 2019 Whitney Biennial and is on view in “From Moment to Movement: Picturing Protest” in the Kramlich Collection at the Manetti Shrem Museum.

Ezawa was born in Germany where he began his studies at the Kunstakademie in Düsseldorf with Nam Jun Paik and Nan Hoover before relocating to the Bay Area. Ezawa has received a SECA Art Award and a Eureka Fellowship. His work has been acquired by leading institutions including the Metropolitan Museum of Art; the Museum of Modern Art; the Whitney Museum of American Art; the Hirshhorn Museum and Sculpture Garden; the J. Paul Getty Museum; the Art Institute of Chicago; the Musée D’Art Contemporain de Montréal; and the Baltimore Museum of Art. He has been the subject of several monographic publications, including The Crime of Art (2017) and The History of Photography Remix (2006).

Organized by the Manetti Shrem Museum. Co-sponsored by the UC Davis Department of Art and Art History.