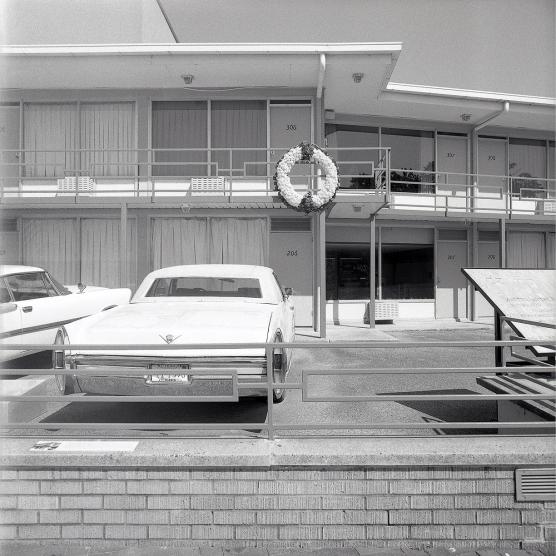 Jonathan Calm is a visual artist in the media of photography and video, and assistant professor at Stanford University. He will present “African-American Automobility:  A Green Book Journey.”

Calm’s earlier work focuses on the relationship between photography and urban architecture – specifically the problematic legacy of European Modernism and its impact on public housing – and the ways in which technologies of representation determine the cityscape.

In his recent work, Calm has pointed his critical eye toward American car culture, exposing how the mythical promise of a boundless journey across the land masks a more sinister reality of African American automobility. He draws inspiration from the Negro Motorist Green Book, a travel guide published during the last three decades of the Jim Crow era to direct travelers of color to safe and dignified accommodations. Through a varied array of media – including performance, installation, reenactment and portraiture – Calm renders a complex image of the black American experience on the road as a precarious privilege rather than an inalienable right. He is currently engaged in an 18,000-mile research trip to comprehensively document locations listed in the Green Book, and has created and exhibited an expanding body of artwork inspired by this project, on which he has published several essays and lectured at renowned institutions around the country, including the New York Museum of Art & Design and the Peabody-Essex Museum.

Calm’s art practice is international in scope and has been featured in numerous solo and group exhibitions, including “Frequency” at the Studio Museum in Harlem (2005); “Role Play” at the Tate Britain (2006); “Black Is, Black Ain’t” at the University of Chicago’s Renaissance Society (2008); “Streetwise” at the Reina Sophia Museum in Madrid (2008) and the Chelsea Art Museum (2011); “Reconstruction” at the Painted Bride Art Center in Philadelphia (2013); “Rooted Movements” at LMAK projects in New York City (2014); “Leap Before You Look: Black Mountain College 1933-1957″ at the ICA in Boston (2015); and “African American Automobility” at Fisk University’s Carl van Vechten Gallery in Nashville (2018). His work has been reviewed in numerous publications, among which the New York Times, Art in America, New Yorker, Village Voice, Artforum, Washington Post, and Wall Street Journal.