A print-friendly map of the Music Annex is available here.

Christian Baldini has served as the Music Director of the UC Davis Symphony Orchestra since 2009, and is the Barbara K. Jackson Professor of Orchestral Conducting at UC Davis. Since 2012, Baldini also has served as Music Director of the Camellia Symphony Orchestra in Sacramento. In past seasons Baldini has been an assistant conductor with the BBC Symphony in London and the San Francisco Symphony. Baldini recently made a much anticipated debut in London conducting Verdi’s Aida at the Coliseum for English National Opera. He is a dynamic artist with a pure and warm sense of musicality and “a keen ear for detail” (The Scotsman, Edinburgh). When he conducted Stravinsky’s The Rite of Spring in Argentina, the Buenos Aires Herald praised Baldini for bringing a “Symphonic Revival” to the country. His Mozart CD conducting the Scottish Chamber Orchestra received 5-star reviews from the BBC Music Magazine (Recording of the Month), Music Web International, Gramophone, The Guardian, Sinfini, Classic FM, etc. In 2014-15 Baldini conducted eleven concerts with the San Francisco Symphony, and he returned for guest conducting engagements in Buenos Aires and London. He guest conducts regularly several international orchestras including the Munich Radio Orchestra, Buenos Aires Philharmonic, National Symphony (of Argentina, including a tour for Ginastera’s 100th Anniversary), BBC Symphony Orchestra, National Symphony Orchestra (D.C.), Orquestra Sinfonica do Porto (National Symphony of Portugal), Orquesta de Cámara de Chile, San Francisco Symphony, and opera for the Aldeburgh Festival (United Kingdom) and the Teatro Colón (Buenos Aires). Equally at home in the core symphonic and operatic repertoire as in the most imaginative and daring corners of contemporary music, he has presented world premieres of over 100 works. When he made his debut conducting in South Africa, Moira de Swardt stated that “passion and dedication intersect for a fabulous orchestral concert.” After Baldini conducted the Sao Paulo Symphony Orchestra (OSESP, Brazil), critic Arthur Nestrovski from the Folha de Sao Paulo praised this “charismatic young conductor” who “conducted by heart Brahms’s First Symphony, lavishing his musicality and leaving sighs all over the hall and the rows of the orchestra”; and in his recent performances of Stravinsky’s The Rite of Spring and Varèse’s Amériques, the Buenos Aires Herald hailed Baldini for bringing “A Symphonic Revival” to the Teatro Argentino.

Baldini was a featured composer at the Acanthes Festival in France and the Ginastera Festival in London. His compositions have been performed by orchestras and ensembles including the Orchestre National de Lorraine (France), Southbank Sinfonia (London), Munich Radio Orchestra (Germany), New York New Music Ensemble, Memphis Symphony Orchestra, Daegu Chamber Orchestra (South Korea), Chronophonie Ensemble (Freiburg), and the Ensemble Modern (Frankfurt). His music appears on CD on the Pretal Label and has been broadcast on the Southwest German, Austrian and Bayern Radios, as well as on the National Classical Music Radio of Argentina. He has also conducted and recorded contemporary Italian music for the RAI Trade and Tactus labels. His compositions are published by Babel Scores in Paris.

As a conductor, Baldini was privileged to learn from Kurt Masur, Michael Tilson Thomas, Leonard Slatkin, Peter Eötvös, Martyn Brabbins, Gerardo Edelstein, and Guillermo Scarabino. He holds degrees from the State University of New York at Buffalo (Ph.D. in composition), the Pennsylvania State University (master’s in conducting), and the Catholic University of Argentina (bachelor’s degree in conducting and composition).

In 2012 Baldini made his conducting debut in Salzburg, when he was selected as one of three conductors out of 91 submissions worldwide for the Nestlé/Salzburg Festival Young Conductors Award. Baldini’s work has received awards in several competitions including the top prize at the Seoul International Competition for Composers (South Korea, 2005), the Tribune of Music (UNESCO, 2005), the Ossia International Competition (Rochester, NY, 2008), the Daegu Chamber Orchestra International Competition (South Korea, 2008), and the Sao Paulo Orchestra International Conducting Competition (Brazil, 2006). After teaching and conducting at the State University of New York in Buffalo, Baldini became the music director of the UC Davis Symphony Orchestra in 2009. In recent seasons, Baldini has conducted multiple world premieres as well as important local premieres such as Varèse’s Amériques, Berio’s Sinfonia, Ligeti’s Violin Concerto, as well as cycles of symphonies by Sibelius, Brahms, and Schumann. Baldini recently made his guest conducting debut at the Concertgebouw in Amsterdam (which was live-streamed worldwide). Baldini is also a guest conductor with Ensemble Dal Niente from Chicago, one of the most innovative new music groups in the world.

A new work by Aida Shirazi, doctoral student in music composition, will be premiered by the Camellia Symphony Orchestra, under the direction of Associate Professor Christian Baldini on Saturday, Nov. 21 at 5 p.m. (PST).

The concert will include Beethoven’s Piano Concerto No. 4, with soloist and former Davis resident Andrei Baumann, and Christ on the Mount of Olives, and San Martin’s what remains, written for the UC Davis orchestra and chorus.

“I chose to pair one of the most energetic, dramatic and poetic works of the symphonic literature with two beautiful and very different concertos, which feature the soloist in a very different way — from the exquisite Romantic, lyrical vein of Rachmaninov, to the extraordinary and imaginative sound world of Lutosławski.”

Along with composer Theo Chandler, UC Davis graduate student in music Daniel Godsil has received the Steven R. Gerber Prize from the League of Composers/ISCM for his composition titled Cosmographia.

JP Jofre will be a featured soloist and composer in the UC Davis Symphony Orchestra’s performance of works by Argentinian composers on Saturday, Feb. 2.

“Sing High” composed by Christopher Castro, alum now lecturer, has its world premiere on Saturday, Feb. 16. The Camellia Symphony Orchestra, under the direction of Professor Christian Baldini, performs the piece as part of their program, “Past, Present & Future.”

The concert begins at 7:30 p.m. at C.K. McClatchy High School Auditorium in Sacramento. There is a pre-concert talk beginning at 6:45 p.m.

Rimsky-Korsakov is widely considered to have been a master of orchestration, and “Scheherezade” contains what many regard to be the most striking and vivid musical depiction of a storm at sea in all of the orchestral repertoire.

The [violin] concerto is known for its mix of Hungarian folk melodies, Bulgarian dance rhythms, modern microtonality and references to Medieval and Renaissance music — including the composer’s use of scordatura (an alternate tuning of the violin that was used by Baroque composer H.I.F. Biber in some of his violin sonatas).

On Saturday, April 30, the Camellia Symphony Orchestra, under the baton of music director and conductor Christian Baldini, will close its 53rd season with a concert titled “Magnificent Spirit” at 7:30 p.m. at the Sacramento City College Performing Arts Center.

The UC Davis Symphony Orchestra, University Choir, Alumni Choir, and the community-based Davis Chorale will be featured together in a concert on Sunday, March 13, at 7 p.m. at the Mondavi Center, which will include a performance of the Symphony No. 9 of Ludwig van Beethoven, as well as shorter works by Beethoven and W.A. Mozart. It will be a big event, with nearly 200 singers and a large orchestra on stage.

The concert also will feature a return by cellist David Russell, who appeared with the orchestra in 2007 for the premiere of UC Davis faculty composer Laurie San Martin’s Cello Concerto. This time, Russell will be featured in the new cello concerto by Nichols (who is, incidentally, San Martin’s spouse).

The Camellia Symphony Orchestra, under conductor Christian Baldini, will perform in Sacramento at 7:30 p.m. Saturday, Oct. 24.

Returning by popular demand will be soprano Carrie Hennessey, singing arias from “Don Giovanni” and “Le nozze di Figaro” by Mozart and “Don Carlos” by Verdi. Opening the program will be “Midsommarvaka” (Swedish Rhapsody No. 1) by Swedish composer Hugo Alfvén (1872-1960). Concluding will be the moody Symphony No. 4 by Finnish composer Jean Sibelius (1865-1957).

“That the overtures are as much of a pleasure to listen to as the arias is thanks to the exceptional qualities of the Scottish Chamber Orchestra (SCO) under conductor Christian Baldini—never rushing, usually finding the perfect tempo in common with his and Robin Ticciati’s predecessor in perfect SCO Mozart, Sir Charles Mackerras.”

This sparkling recording features the Scottish Chamber Orchestra under Christian Baldini conducting a personal selection of arias from six of Mozart’s well-loved operas, alongside their respective overtures. The soprano Elizabeth Watts, winner of the 2006 Kathleen Ferrier prize, is the featured soprano and she brings character and depth of understanding to her performance.

Stepans grew up in northern part of East Bay — specifically the Kensington/El Cerrito/Albany area. “I have played horn since the fourth grade, but have only really started practicing it in the last four years,” he said. “Before that, I played football and wrestled in high school so there was no time to play horn in between sports and school.”

“It is scored for an extremely unusual orchestra: quintuple woodwinds (including a heckelphone, similar to a bass oboe), eight horns, six trumpets, five trombones (including a contrabass trombone, that we are borrowing from the San Francisco Symphony), two tubas, celesta, two harps and 14 percussionists — including a siren — plus orchestral strings.”

The Performing Arts Center is on the Sacramento City College campus, 3835 Freeport Blvd., Sacramento. Parking is free in the west lot.

The arts at UC Davis are in full bloom this quarter with a special emphasis on work by students, many of whom are finishing final projects for graduation.

“… on Tuesday, Tilson Thomas asked Baldini if he would like to conduct a rehearsal of Adams’ “The Light that Filled the World.” The piece was written in 1998 for the Paul Dresher Ensemble, and to a certain degree it reflects the composer’s response to the experience living in the spacious northern landscape of Alaska.

The UC Davis Symphony Endowment was established by members and friends in 1992 with the goal of assuring the orchestra’s access to first-rate teachers and soloists, a handsome orchestral library, and enhanced opportunities for travel.The remarkable success of the Endowment—having grown in its first ten years from about $30,00 to over $400,000 in market value—is one important indicator of the UCDSO’s excellent artistic and financial health. Via UC Davis’s online-giving website, we have added a convenient way to make a gift to the Symphony’s Endo 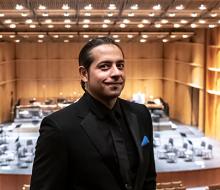