Born and raised in Tehran, Iran, Aida Shirazi’s music is described as “well-made” and “affecting” by The New Yorker. She holds her B.A. in classical piano from Tehran University of Art (Iran), and her B.M. in music composition and theory from Bilkent University (Turkey). She studied santoor (traditional Iranian dulcimer) with Parissa Khosravi Samani.

Her music for solo instruments, voice, ensemble, orchestra and electronics is often influenced by literature, language, and Iranian classical music.

She was an awardee of a Provost’s Fellowship in Arts, Humanities and Social Sciences in the 2016–17 academic year.

Alumna Aida Shirazi (Ph.D., composition, ‘21) is participating in “Rage, Rhythm, Renaissance: Performances of/in the Ongoing Iranian Revolution,” a panel discussion, at NYU Tisch School of the Arts on Nov. 21. The event begins at 7 p.m. (ET) and will be available as a Zoom Webinar.

Professor Shiva Ahmadi’s newest animation is included in the exhibition “From Moment to Movement: Picturing Protest in the Kramlich Collection” at the Manetti Shrem Museum, on view until June 19.

“Songs of Dionysus, for Two Horns and Electronics,” a world premiere by graduate student in composition Aida Shirazi, will be performed by InterMusic SF grant recipient, Medius Terra Horn Duo on Sept. 19 at Central Stage in Richmond. The performance begins at 4 p.m.

A new work by Aida Shirazi, doctoral student in music composition, will be premiered by the Camellia Symphony Orchestra, under the direction of Associate Professor Christian Baldini on Saturday, Nov. 21 at 5 p.m. (PST).

Works by Aida Shirazi, a doctoral student in music composition, are featured on several recent and upcoming live or recorded online concerts.

Her “albumblatt” will be part of a concert by pianist Sarah Cahill broadcast on BBC Radio on Nov. 20. It is part of Cahill’s “The Future is Female” project that commissioned works by women composers from around the world.

Aida Shirazi (PhD student in composition at UC Davis) spoke to NPR Capital Public Radio’s Jennifer Reason in a September 1, 2020 interview. Aida began by relating her grandfather’s musical interest and influence and her initial music study in Iran, which included several female students in a bachelor’s program despite Iran’s  government restrictions on women.

Graduate student composer Aida Shirazi has been selected to be one of ten composers from around the world to participate in the IRCAM Cursus Program for Composition and Computer Music in Paris, France, in 2020–21. At Cursus, which was founded by composer-conductor Pierre Boulez, the ”philosophy is that the computer is a tool for musical creation.” In 2019 Shirazi participated in IRCAM’s ManiFeste summer festival.

Doctoral student in composition Aida Shirazi has been included in an extensive feature on female composers from Iran in The New York Times. The piece focuses on the Iranian Female Composers Association, which Shirazi helped found.

UC Davis graduate student in music Aida Shirazi will have a composition performed at New York’s Lincoln Center in the Mostly Mozart series on August 5.

Aida Shirazi, graduate student in composition, will have her “Vestiges” for strings and flute premieres on March 12 by the Left Coast Chamber Ensemble in an evening titled “Sonnets to Orpheus.” The performance takes place in the San Francisco Conservatory of Music at 7:30 p.m.

The concert will be repeated on March 17 at Berkeley Hillside Club at 7:30 p.m.

Music composition doctoral student Aida Shirazi’s “Trio for Violin, Horn, and Piano” is being performed by the Sierra Ensemble on Friday, Oct. 6 at 7 p.m. in the Presidio Officers’ Club, 50 Moraga Avenue, San Francisco.

Tickets are available through Eventbrite.

Music composition doctoral student Aida Shirazi’s “Lullaby for Shattered Angels” is being performed as part of the inaugural “New Music from the Islamic World” series at Music at the Anthology (MATA) in New York July 8.

A story about the concert appears in The New Yorker. 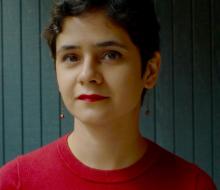