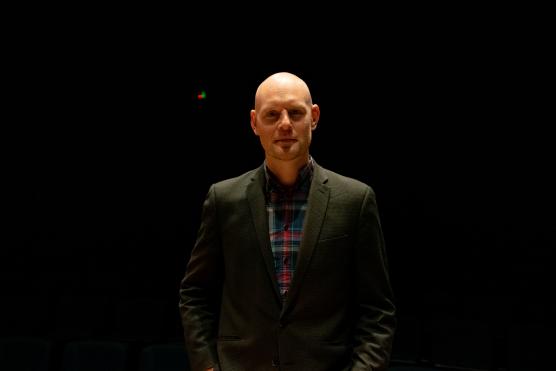 Born and raised in central Illinois, Daniel Godsil (b. 1982) is a composer of chamber, orchestral, vocal, electronic, and film music, currently pursuing his PhD in composition and theory at the University of California, Davis. He holds an MFA in music composition from the Vermont College of Fine Arts, where he studied with John Fitz Rogers, John Mallia, and Jonathan Bailey Holland. He also holds a BM in music composition from Webster University. In 2017 he was selected as a participant in New England Conservatory’s Summer Institute for Contemporary Performance Practice, where he attended master classes with Georg Friedrich Haas and Nicholas Vines.

His music, which has been described by the San Francisco Classical Voice as having an “intense dramatic narrative,” draws from such eclectic influences as progressive rock and death metal, science-fiction, and Brutalist architecture.

Notable performers include Talujon Percussion, the Metropolitan Orchestra of Saint Louis, the University Symphony Orchestra at California State University, Fullerton, the Knox-Galesburg Symphony, Lineage Percussion, the Secret String Quartet, and the Nova Singers, among many others. Recent film scores include the PBS documentary “Boxcar People,” Man Ray’s 1926 silent film “Emak-Bakia” and the feature film H.G. Wells’s “The First Men in the Moon.” Godsil has been a finalist twice in The American Prize Composition Competition (in 2013 and 2014), and was a finalist in the 2014 Red Note New Music Festival Composition Competition. His Quintet for Woodwinds won first prize in the 2004 Fisher Young Composer’s Competition. His choral works are published by Alliance Music Publishing and NoteNova Publishing.

Godsil has also been active as an educator, conductor, and performer at Knox College, Monmouth College, and Carl Sandburg College.

Along with composer Theo Chandler, UC Davis graduate student in music Daniel Godsil has received the Steven R. Gerber Prize from the League of Composers/ISCM for his composition titled Cosmographia.

Music composition doctoral candidate Daniel Godsil has been awarded the 2017 Earplay Donald Aird Composers Competition. His Aeropittura for flute, viola, cello, and piano, will be performed by the Earplay chamber ensemble in March in San Francisco.